Maria Sol is a resident of Basey, Samar. She was one of the many survivors of Typhoon Yolanda’s (international name: Haiyan) onslaught. She thought her family was prepared for the coming of the super typhoon as they survived many storms before, but they were unprepared for what came to pass. They found themselves hanging for their life onto a coconut tree.

When the storm made landfall in their town, she felt strange because she noticed that the typhoon was not just bringing winds, but also a huge swell in the sea. Maria Sol together with her husband were dumbfounded as they witnessed how the water came up so fast that it flooded their area with a very strong current. Although they were expecting a large amount of rain and strong winds, they never thought that the water from the sea that is far from their place would ever reach their neighborhood. Her life and the lives of her family were in grave danger.

She was thinking that if only they were informed that the storm will hit them with huge tsunami-like waves, they could have prepared better. They were not familiar with the term “storm surge”.

The water rose rapidly and they panicked for a time.  She thought that it was too early for her two daughters – one five, the other was three years old – to die. Out of desperation, they swam towards the nearest tree just beside their house as the water rose to 7 and 8 ft.  The waves from the ocean seemed to be very angry. Waves hit them time and again.

Of course, every storm has its end, and when the storm had ended they were surprised that they had survived; saved by the coconut tree, their will to live, and the determination to save their two preschool children. I’m sure Maria Sol and her family will forever thank God for this coconut tree beside their house. They are convinced that the coconut tree is a tree of life.

Although they escaped near death, Maria Sol and her neighbors are still struggling to survive each day from lack of food and other resources. The town of Basey in Samar is one of the places that has been washed out by Typhoon “Yolanda” leaving many people hungry and homeless. 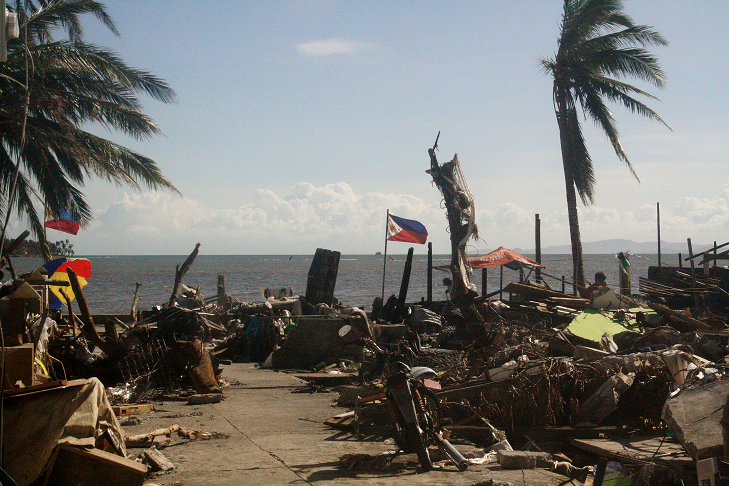 Maria Sol was one of the recipients of the NCCP-ACT Alliance Food Packs.

From All Walks Of Life