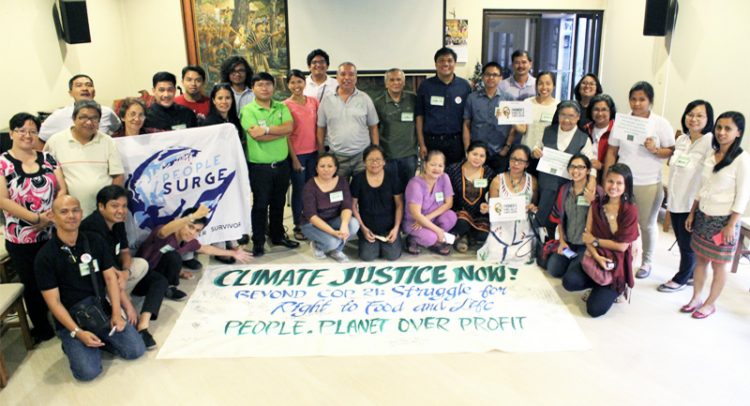 Beyond COP 21: Struggle for Right to Food, Land and Life

(This is a Unity Statement released after the Consultation on Right to Food and Life in the Context of Climate Change organized by the National Council of Churches in the Philippines and the Ecumenical Advocacy Alliance of the World Council of Churches together with Kalikasan and Stewards of Creation. It was held last December 11, 2015, at CICM Provincial House, 14th Street, New Manila, Quezon City and was attended by over seventy participants.)

The Spirit of the Creator God that infuses the whole inhabited earth impels us to realize that the present global economic system that puts a premium on profit rather than people, that fails to respect ecology and is blind to human limitations, has imperiled humanity and all life. As the 21st Conference of Parties of the United Nations Framework Convention on Climate Change in Paris hammers out a new climate agreement, our planet sits on the brink of catastrophe – indeed, our Philippine islands are already experiencing the destructive impacts of climate-induced disasters. Acknowledging that the “earth is the Lord’s and the fullness thereof,” it is our urgent and common responsibility to care for and defend God’s good creation. This entails nothing less than “system change” (deep-seated transformations in economic policies, institutions and structures) and begins with the understanding that climate change is not merely an environmental concern, but is also a matter of justice. Therefore, the following are our calls.

We call on the international community to:

We call on the Philippine government to:

We call on the churches to:

We call upon all like-minded people to join in the urgent task of holding our government and corporations accountable for protecting and respecting people’s right to food, land and life in the context of climate change.