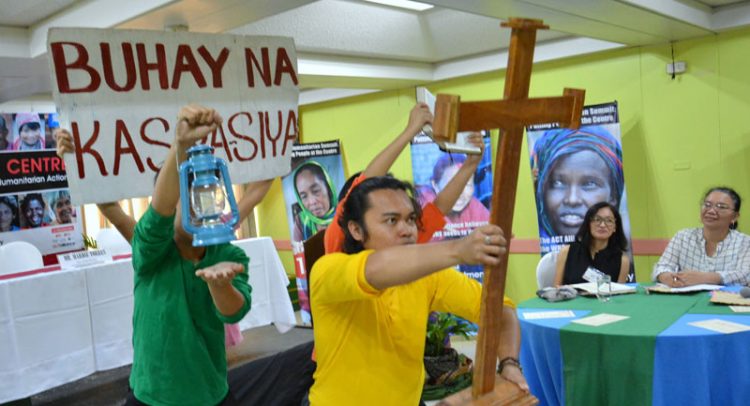 My sharing this morning is based on our reflections on the work of the National Council of Churches in the Philippines, a member of the ACT Alliance, following the onslaught of Typhoon Haiyan. Its magnitude is incomparable to any other natural disaster in this country and caught the attention of the world as never before.

From a Christian perspective, humanitarian work derives its mandate from the compassion of Jesus (Matthew 14:16) for the people and his command to his disciples to “feed them” or “give them something to eat” (Matthew 14:16) and not send them away. It is an expression of the basic model of his ministry – that of being with and responding to the cry of the poor, the hungry and the oppressed and those bound in perpetual chains or bondage that deprive them of their human dignity and addressing these issues in an empowering way (Luke 4:18). It is a faith that is acutely aware that responding to the needs of hungry, thirsty, naked and oppressed people is a primary criterion of divine judgement.

Following World Wars I and II, Christians not only engaged in humanitarian work but also began to question why there were wars in the first place. This established the relationship between humanitarian work as diakonia and a prophetic voice that eventually led to the creation of movements for peace that would be reflected in today’s humanitarian work. Again, not only the need to provide food and medicine to those in need but also the protection and restoration of human dignity were the motivations for humanitarian work. There is of course no dichotomy between peace and justice from the perspective of the NCCP.

Briefly, let me share four points that might help us understand what it means to put people at the center of humanitarian work.

Putting People at the Center is a statement against marginalization

Given our situation in the Philippines where the marginalized namely, the farmers, fisher folks and indigenous peoples are the most vulnerable to the effects of disasters, the greater task of faith-based organizations is to search with diligence those hardest hit, those in the remotest areas, those least paid attention to and those who have the slimmest chance of recovery. This of course is easier said than done and does take some time. This could be redundant or an overstatement as indeed the vulnerable are in remote areas, seldom covered by the media, seldom given attention and have remained economically poor all along. Yet, it is still a solid practice. The character of faith-based organizations is to “search them out”.

Putting People at the Center is affirming the right of survivors to food, health care, and livelihood

Faith-based organizations, at least Christianity for that matter, have a theological perspective that lays claim to human dignity as being so because humanity was created in God’s image and from the beginning “a land flowing with milk and honey” was the destination of God’s chosen people in the First Testament. In the Second Testament this is expressed in the promise of “abundant life” (John 10:10). From this perspective, faith-based organizations have a keen sense of the urgent need to address deprivation of land and food. In the experience of the NCCP, the rehabilitation effort was hampered by the question of land and the staff had to take leadership in pushing for the intervention of local government units. FBOs then are in the position to be a platform for the landless to speak out and to be active intercessors for land allocation. The sad reality of a government unprepared for disaster, as it eventually admitted in the case of Typhoon Haiyan, speaks volumes about why people have had to resort to mass actions. We have had this massive mobilization recently and even now hungry farmers are massing up in other parts of the country to demand food. (To say they were organized by some other groups because they rode on trucks and were from other places is the height of insensitivity. It rubs salt on the injured backs of these farmers.) In positioning themselves with the people, FBOs speak and act from that perspective. This is often misunderstood as being anti-government. As a former Chairperson of the NCCP bluntly told some presidential representatives, FBOs would not be engaged with these kinds of things (being critical and engaging in responses to human need) if the government was “doing its job”. FBOs can be prompters for slow paced government response if at all.

Putting People at the Center is building communities

NCCP affirms the correctness and validity of organizing work as essential to any humanitarian response. True, it is a painstaking process but it is a part of the struggle for survivors, occupied as they are by their condition, to affirm their self-worth and what they are capable of doing and becoming. It means that FBOs are to say the least “babad” or integrated in the community to be the midwife of an emerging community. The direction of the community is the function of the members of that community. Their empowerment for self-determination is as crucial as their mobilization into disaster preparedness. Their empowerment means appreciating their individual and community rights to the fullest and being able to demand from government that these rights be satisfied. We know fully well that this country is among those ranked highly vulnerable to the effects of climate change. It means, disasters are here to stay for now. Would that it is not, but it will prove prudent if we anticipate future disasters to be of Haiyan’s magnitude. Consequently, FBOs have a dual role in (a) calling to task the government for more proactive engagement especially in developing emergency response plans and putting in place structures or mechanisms for disaster risk reduction and (b) preparing the communities through appropriate trainings along the same lines.
Putting People at the Center is an ecumenical task

By ecumenical we mean as pertaining to the whole inhabited world and the “task of the whole church in bringing the whole Gospel to the whole world”. That Gospel is nothing less than the good news that brings and sustains life. There is a story in Scripture that says when the fishermen were having a hard time with their heavy catch, they summoned the others in another boat. FBOs can mobilize resources both from their membership and from partners abroad. Mainly FBOs are universal in character possessing natural links to similar organizations around the world. FBOs in the Philippines or elsewhere can appreciate the fact that no single entity alone, much less an ill-prepared government or one concerned with other things, can deal with massive disaster. On the surface, the creation of the ACT Philippines Forum bodes well for coordinated and collaborative work notwithstanding that each member has its natural links overseas which can help. Because of this link, the FBOs can engage in the long term and see their work to the end. In the wider ecumenical fellowship, FBO partners in northern countries for instance may be called upon for collaborative work in advocacy and lobby work, in calling attention to their governments for policy changes with respect, for instance to mitigating the impact of climate change by helping countries in the south. The sharing of resources is inherent in Christian faith and witness. It is what makes Christians Christian. In this sense the donor-recipient mentality is cast aside in favor of a relationship that is mutually benefitting, enriching and rewarding.

FBOs have a unique role to play in humanitarian work and that is mainly to ensure that human dignity is at the core of the endeavor. Constructive criticism to government is by all means a necessary element of the collaboration between government and FBOs in the delivery of services. After all has not the government expressed the need for collaboration, calling on FBOs to help? Their compassion is motivated by faith not only in a God who wills abundant life for all but also faith in the capacity of the people to eventually rise and claim that promise of abundant life. May faith-based organizations remain faithful to that apostolate.

Note: At the forum, a participant added his observation that faith based organizations, too have a higher trust rating.