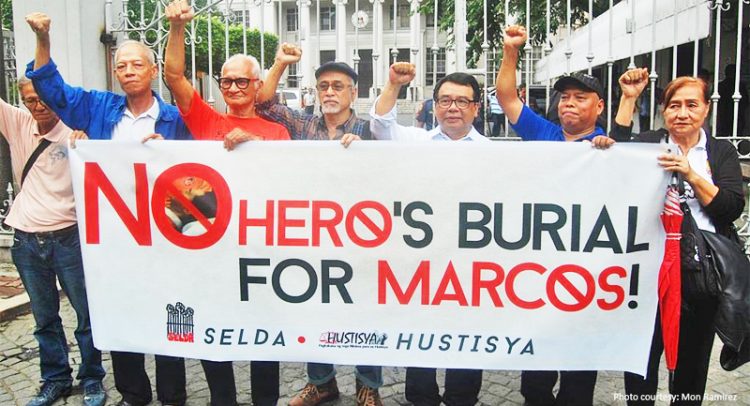 “To foretell the destiny of a nation, it is necessary to open the book that tells of her past” wrote Jose Rizal. At this juncture of our history, with the pending burial of Ferdinand Marcos at the Libingan ng Mga Bayani, we are in danger of closing that book or even re-writing it. We are in danger of forgetting the history of tyranny: where Marcos declared martial law to perpetuate himself in power, suppressed the freedom of the press and dissent so the people would not know the truth, took over private and public business personally and allocated others to his cronies, led our nation into a massive debt burden (from U$2 billion to U$30 billion) and the precipitous decline of the gross domestic product; how he and his family stole more than U$5 billion from the Filipino people only a miniscule amount of which has been recovered; how he conducted a war on the basic sectors of society and drove the nation and our people into poverty; how he lied and embellished his past to make himself appear a hero, while he was personally profiteering from the national patrimony and the scarce resources of the people; and, how over the period of his regime more than 70,000 people were imprisoned, many tortured and more than 3,000 killed as he sought to silence the legitimate voice and struggle of the Filipino people.

The National Council of Churches in the Philippines knows this oppression first hand as our offices were raided, our staff detained, and many faithful church workers and pastors in our member churches imprisoned, tortured and killed. The burial of Marcos as a hero will not realize the vision of the President to heal or unify the nation. Rather, it will add to the growing amnesia of our nation about the realities of the past. It will re-write history in favor of the tyrant, make our nation vulnerable to the rise of dictators and their influence over the destiny of the Filipino people in the future. This is a gift unfit for our younger generation who must derive lessons from the past as they live under the legacy of that past including the people’s collective act to oust a despot. Let us not blur our historical memory. The burial of Marcos in the Libingan ng mga Bayani is pouring salt into the wounds of real heroes and heroines who stood up against oppression and paid with their lives.

In February 1986, the Filipino people said enough is enough. The world looked at the Philippines in awe as it drove away a dictator through a people power revolution. That show of the empowerment of the Filipino people was a model of peaceful transition of government. With the burial of Marcos in a hero’s cemetery, we will be telling ourselves and the world, that in the end corruption pays and tyrants win.

Let Marcos be buried in his home province and respect the sacrifice and suffering of real heroes and heroines who stood up against tyranny and dictatorship. Let not that shovels and spades of the grave diggers re-write our history and bury the memory of how our forebears fought for our liberty. The wisdom of the ages once said, “Then I saw the wicked buried; they used to go in and out of the holy place, and were praised in the city where they had done such evil things. This is also vanity.” (Ecclesiastes 8:10)