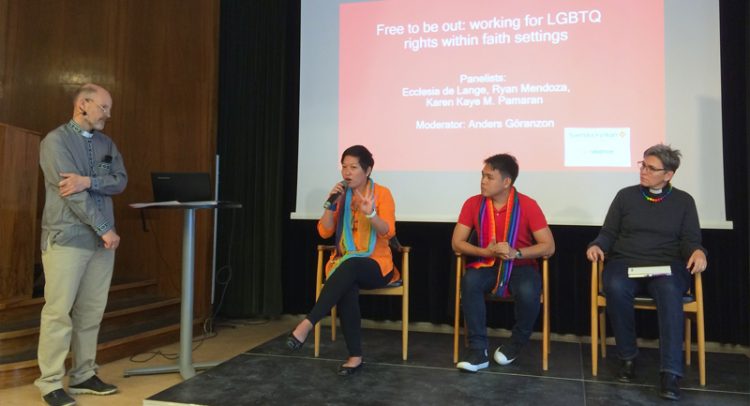 Visit Your URL In the Church of Sweden’s (CoS) biannual gathering “Världens Fest” (Feast of the World) in Västerås, Sweden, openly lesbian and gay church workers from the Philippines and South Africa shared their work in a seminar themed, “Free to be out: Working for LGBTQ rights within faith settings.”

take a look at the site here “Världens Fest fulfills the role of exposing programs that CoS is involved with and areas of work that need to be highlighted with church members. With sexual and reproductive health and rights (SRHR) high on our agenda it was necessary to bring partners from South Africa and the Philippines. This will not only strengthen our existing partnerships but also explore new ways of working together,” said Rev. Fr. JP Heath, policy advisor on HIV and Theology of CoS.

check this Pastor Kakay Pamaran, Field Education Program Assistant of Union Theological Seminary (UTS) and Board Member of the Global Interfaith Network for People of all Sexes, Sexual Orientation, Gender Identity and Expression (GIN-SSOGIE), Ryan Mendoza of the HIV program in the National Council of Churches in the Philippines (NCCP) and Rev. Ecclesia de Lange, Director of Inclusive and Affirming Ministries (IAM) based in Cape Town, South Africa highlighted the challenges that remain for LGBTQ people of faith in their own congregations in their respective countries.

pharmacie en ligne fiable cialis “In the past three years, four out of ten member churches of the NCCP have issued statements on human sexuality that includes varying levels of expression of LGBTQ non-discrimination particularly in church membership and ordination. The reality is that concrete responses to LGBTQ rights in local churches remain to be seen and marriage equality is an ongoing and tense discourse,” said Mendoza.

blog Pastor Pamaran added, “Physical spaces to conduct open and affirming worship are shrinking. To come out as a practicing Christian as an LGBTQ person is still met with disbelief and derision by other LGBTQ people and Christians themselves.”

Rev. De Lange was suspended and discontinued as an active minister of the Methodist Church of Southern Africa in 2010 on a charge of breaching church policy after announcing her intended marriage to her same-sex partner.

In 2012, the NCCP adopted the pro-SAVE (Safer Practices, Access to treatment, Voluntary Counseling and Testing, Empowerment) and anti-SSDDIM (Stigma, Shame, Denial, Discrimination, Inaction, and Misaction) approach to HIV and AIDS that was developed by the International Network of Religious Leaders Living With or Personally Affected by HIV and AIDS (INERELA+) in Southern Africa.

“Over the years, the NCCP has seen that you cannot deal with HIV and AIDS correctly if you don’t deal with issues of gender, sex, and sexuality. It is clear that sex-negativity, patriarchy, homophobia, biphobia and transphobia reinforced by faith communities have been fueling new HIV infections and AIDS related deaths. All our education, advocacy, and networking activities have been strongly focused on this,” said Mendoza.

In August 2016, the UTS opened its Center for Gender and Sexuality as an avenue to engage issues around gender, sexuality, and theology.

“Theological education in the Philippines is promising. There is increasing formal space in our seminary where questions on gender and sexuality can be raised; where there can be healthy discourse and exchange of ideas and experiences.  UTS has been intentional in integrating gender and sexuality into its curricular consciousness,” said Pastor Pamaran.

She added, “In these spaces many assumptions of gender and sexuality are investigated. In terms of hermeneutics, theologizing, and praxis, these are being unpacked and subjected to postcolonial and/or postmodern lenses.”

As a concrete response to issues raised in the discussions, CoS, NCCP, and UTS move forward with strengthened partnerships.

“Hopefully the discussions with Rainbow foundation will support work with LGBTQ children in the Philippines. This engagement with both NCCP and UTS has also given us a new collaboration to develop the third in our series of books on human dignity and human sexuality. We are delighted that working with indigenous people is now added to our areas of collaboration. Working with Pastor Pamaran on this strengthens our partnership and support of GIN-SSOGIE, where she serves as a board member,” said Rev. Fr. Heath.