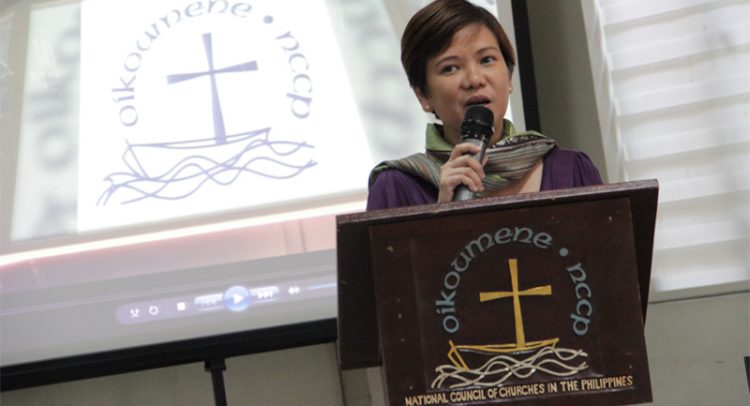 Perspectives on LGBTQIA: An Ecumenical Perspective

The refrain of one of my favorite hymns entitled: “In The Midst of New Dimensions goes like this:

For me it speaks powerfully of a God of hope. It speaks of one’s indomitable spirit to conquer the unknown, to face uncertainties and fear – and stand in the midst of a people who journey under the power of a Great Spirit that is beyond the realm of human’s finite capacity. A Great Spirit – divine and mysterious, who leads the people in their quest for a better world.

A stanza of the hymn, states:

We are man and we are woman, all persuasions, old and young,
Each a gift in your creation, each a love song to be sung.

How beautiful are the words that aptly describe God’s statement when all of creation were finally done and God said: “It was very Good!” (Genesis 1:31a)

Truly, a rainbow speaks of Hope. But it also currently speaks of people struggling against discrimination, stigmatization, denial and rejection.

But more than the words beautifully crafted to compose the hymn, the hymn is actually a historical statement that celebrates diversity and uniqueness within the body of Christ. “The hymn was written by Rev. Julian Rush, who served different churches in US for 17 years until finally coming out and acknowledging his identity as a gay man. When he came out, his church decided that he is no longer fit to be their pastor and stopped giving him his salary. After the incident, a bishop appointed him to a small church in Denver, the St. Paul UMC. Though the church already had a pastor and very little money, they accepted his appointment as a public gesture of the church’s support to the gay community and as an act of commitment to the cause of social justice. St. Paul UMC was one of the first three churches in US to become a Reconciling Congregation in 1984. The hymn was Rev. Rush’s record of his personal struggle to be open and honest in the church even in the midst of rejection. Despite the antagonism of the church, he wrote this very affirming hymn”. [1]

Even in earlier times, we can see that the assertions and articulations, be that theological or from the perspective of Human Rights, human sexuality has been an area that constantly demanded our attention; challenge our way of thinking and living; and our pastoral and prophetic witness.

Recent developments in the international community speak of a seemingly polarized positions of different churches on the issue. On one hand, we heard the news of the “Anglican Communion sanctioning the Episcopal Church in the US for blessing same sex marriage. This generated criticism citing the primates’ selective application of punitive measures saying that the Communion has actually neglected to penalize Anglican church leaders who promoted state-sanctioned persecution of gays in countries like Uganda.”[2]

On the other hand, several partners of the National Council of Churches in the Philippines (NCCP), including the United Church of Canada (UCC), United Church of Christ USA (UCC-USA) and Church of Sweden (CoS) have significantly voiced out their acceptance of LGBTs in their churches and have declared their churches to be open to people with different sexual orientation, gender identities and expressions (SOGIE).

Building of Just and Inclusive communities has been primary in the ecumenical agenda. As such the ecumenical community recognizes that “exclusion in various and diverse forms exists”. The struggle of the basic sectors of our society for peace and justice has pushed them away from the center. Indigenous people’s struggle for their ancestral domain, workers demand for just wages, peasants do not own the land that they till, women suffering from the multiple burden of gender, class and national oppression, young people fighting for their right to education etc… all these have been overt and covert forms of exclusion. Exclusion have caused deep and unbearable pains among peoples, it has divided communities, killed those who dissent, silenced those who voice out, rendered invisible people who are different and who do not conform to the norm. The LGBT community has their own share of that painful exclusion. Our conformity to heteronormativity as the only acceptable “norm” ha painfully excluded many.

The ecumenical community in the Philippines continues to grapple with the issue of human sexuality. It is a challenge to many of our member churches not only on how to bring this to their discussion table because of lack of knowledge on as to how to understand things but also because this will open other host of issues related to it such as Sex, Sex Education, Sexual Expressions and Gender Identities. Things which are considered “taboos” in the churches. 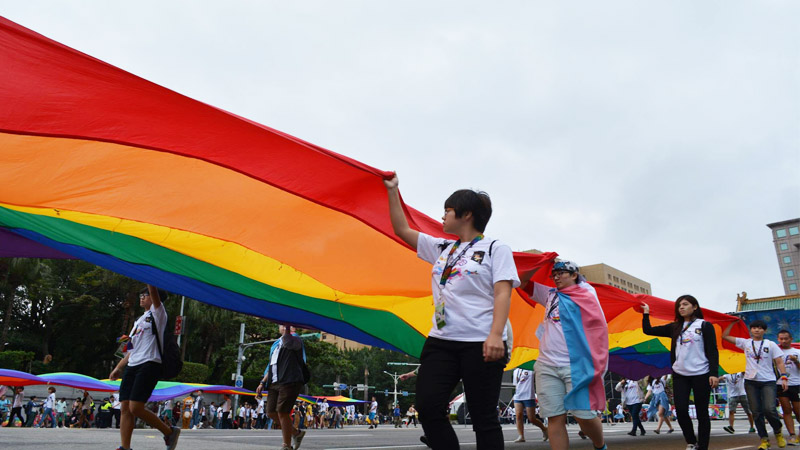 In its 24th General Convention held last November 23-26, 2015, the NCCP approved a statement entitled: “Create Safe Spaces for Understanding Human Sexuality”. The statement affirms that human beings are created in the image of God. As such, this imbues them with dignity. Part of dignity is being able to freely express oneself. Human sexuality is a gift from the Creator, a truly good and perfect gift that must be affirmed and celebrated. It laments that issues on sexuality are wrapped in secrecy and are not discussed in the open due to a wrong perception that sex talk is indecent talk. But reality tells that inside and outside the church, there is a fast-growing population of women and men who dare to openly express their sexual orientation and gender identity. It is sad that these expressions are met with discrimination and condemnation, alienating them from the rest of society. Most are denied of educational and employment opportunities. Worse, they are subjected to hate crimes, torture, harassment, sexual assault, rape, and other forms of human rights violations. This is an affront to the God who calls one and all into liberating and inclusive relationships. 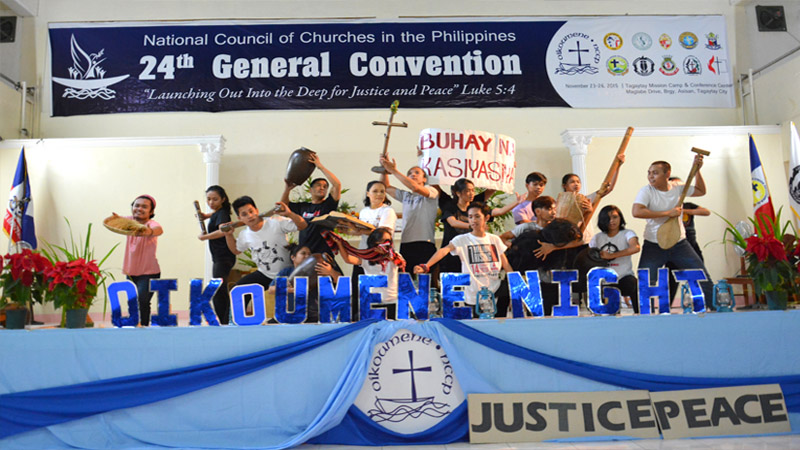 The statement ends with three recommendations that will hopefully be undertaken by NCCP member churches. It encourages churches to create safe and hospitable spaces where persons can freely talk about their sexual orientation and gender identity without fear of condemnation; develop biblically-based/theologically sound materials on human sexuality to be used for study and reflection in the churches toward a more welcoming environment for those who are perceived to live outside the social norms of sexuality; and calls on churches to proactively and intentionally draw in persons with different sexual orientations and gender identities into activities of the church and church organizations where they can share their gifts and graces.

At present, only one among the 10 NCCP-member churches has a definitive statement on LGBT, the United Church of Christ in the Philippines (UCCP). Their statement entitled, “Let Grace Be Total (LGBT)” asserts that “With the gift of God’s grace that heals and accepts unconditionally, LGBTs therefore can take their own place within the body of Christ and can contribute their own gifts towards the ministry and mission of the church. They are to be considered and respected as legitimate members of the community and fellowship of the church and as such should be protected from the prejudices, discrimination and even bullying by some sectors of the community.” [3]

I would like end my sharing with a glimpse of hope – in September to November 2015, the NCCP together with the World Council of Churches – Ecumenical HIV and AIDS Initiatives and Advocacy (EHAIA), conducted a mapping study aiming to map the current response/s of NCCP member churches on HIV. It also included some interviews with the Philippine Council of Evangelical Churches (PCEC) and the Catholic Bishops Conference in the Philippines (CBCP) and some LGBT organizations. Hopeful I said because, the perceptions of people interviewed coming from the member churches and its leadership pointed to a trend of openness and support to LGBT initiatives and support. The questions posted are all about non-discrimination as a prevention strategy for HIV – and the responses showed positive signs. However, the gap can be seen on how people in the churches (I mean ordinary members, staff in the national offices, pastors in the churches) see the issue differently from our heads of churches. There is a seeming reluctance, hesitancy among church heads, especially those who do not have a definitive statement on Human Sexuality. What I see is the present and glaring challenge of how these positive attitudes and support can be translated into a policy statement of a definitive stance of churches to be welcoming, accepting and affirming of people with different sexual orientation and gender identities and expressions.##

May the God of Rainbow be with us in this journey!

by Ms. Darlene Marquez-Caramanzana
National Council of Churches in the Philippines/
Coordinator, AWIT