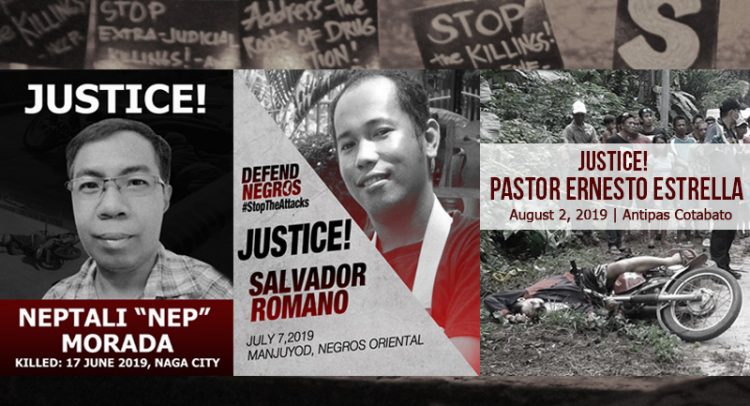 Justice and accountability for human rights violations in the Philippines

The essence of human rights is about protecting human dignity, and it is hinged on the principles of justice and accountability. However the human rights situation in this country shows a woeful lack of respect for God’s gift of human dignity because of the magnitude of human rights violations and because those who commit them face no repercussions, augmenting the climate of impunity.

Take the war on drugs, according to numerous reports, around 27,000 people have been killed in relation to the campaign against illegal drugs. Mostly coming from poor communities, the number of deaths, both at the hands of the police and by unknown individuals, has not been adequately investigated; the appropriateness of police conduct has not been determined; and the unknown assailants have not been apprehended. Seldom do we hear about big time drug lords who have faced the bar of justice. The war on drugs has been relentless, and the situation will only intensify if it will continue to be treated as a criminal problem and not a health concern. To make matters worse, there are the “ninja cops” who recycle seized drugs making the entire campaign deeply suspect. There was hope that there will be positive changes in the conduct of the government’s campaign on illegal drugs upon the appointment of Vice President Leni Robredo as the anti-drug czar. Unfortunately, she was fired from the position after merely three weeks.

In addition to the war on drugs, more than 2,000 human rights defenders have been attacked through various methods including threat, intimidation, harassment, trumped-up charges, and extrajudicial killings. There are now more than 200 cases of extrajudicial killings of human rights defenders including church people, some of whom are from NCCP member churches.  Most of the victims of the various rights violations are critical of the government’s programs and policies that disregard the rights of the people. Even the Council was included in the list of “front organizations of local communist terrorist groups” by the Department of National Defense.

But a time of reckoning shall come, God will “…let justice roll down like waters, and righteousness like an ever-flowing stream” (Amos 5:24). The NCCP will continue to uphold God’s gift of human dignity, work with other rights defenders and maximize all national and international venues and platforms so that those who violate and undermine human rights will face justice and accountability for their transgressions. We affirm our commitment to continue the search for justice and peace, however arduous the path may seem. We demand the prosecution of those responsible for crimes against the Filipino people. We reject the militarist and repressive solution to the armed conflict and the drug problem.

We call on our international partners to be in solidarity with the Filipino people in the quest for justice and accountability in our country. We will pray and act unceasingly and with full determination to bring an end to the culture and climate of impunity that pervades Philippine society, as we work towards the full realization of God’s promise of an abundant life for all.

*This statement was approved by the 25th General Convention of NCCP last November 25 – 28, 2019 at Lutheran Center, Sta. Mesa, Manila.