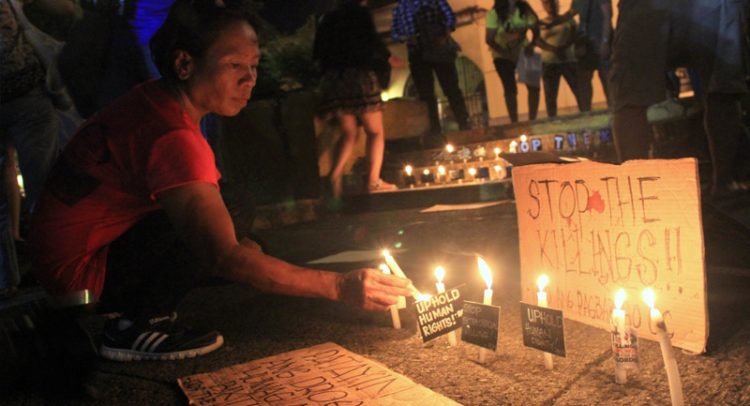 Member organizations of EcuVoice, namely Rise Up for Life and for Rights, Karapatan, National Union of Peoples’ Lawyers (NUPL) and the National Council of Churches in the Philippines (NCCP), submitted reports on the “sham drug war, the shrinking civil society and democratic space, including attacks on human rights defenders, lawyers, and church people in the Philippines.”

“With the intensifying transgressions on the Filipino people’s political rights and civil liberties, we are participating in this report-making process of the UN High Commissioner for Human Rights to pursue justice and accountability. We are determined to bring to the international community’s attention the grave violations under the Duterte administration to the UN Human Rights Council (UNHRC) and the International Criminal Court (ICC), despite the government’s disregard of its commitments and obligations to international rights mechanisms,” said Dr. Edita Burgos, convenor of EcuVoice.

Emily Soriano, a member of the Rise Up for Life and for Rights and mother of a victim of extrajudicial killing in line with the “drug war,” expressed support for the ICC’s finalization of its preliminary examination next year, as she emphasized the government’s direct accountability for the killings through its brazen implementation of a draconian policy in the illegal drugs campaign, assurance of non-accountability of perpetrators, the lack of interest to investigate and prosecute, among others.

For its part, Karapatan underscored in their submission that “the human rights situation in the Philippines is worsening, marked by disrespect to the right to life and civil liberties, strengthened climate of impunity and closing civic and democratic spaces, and unmet obligations to core international human rights conventions.”

“We call on the Philippine government to rescind its counterinsurgency campaigns mainly through Executive Order No. 70 that has resulted in extrajudicial killings, disappearances, torture, illegal or arbitrary arrests and detention, forced or fake surrender and forcible evacuation. We strongly recommend that the UN Human Rights Council adopts a resolution initiating an independent fact-finding mission or a Commission on Inquiry regarding the human rights situation in the Philippines,” said Cristina Palabay, Karapatan secretary general.

Meanwhile, the NCCP, in their report, emphasized that the political persecution and attacks of church leaders and workers have become more pronounced under the Duterte administration. Aside from the “red-tagging” of NCCP itself, the report also emphasized the cases of Sr. Elenita Belardo of the RGS, Sr. Patricia Fox, NDS, and foreign missionaries of the United Methodist Church, Roman Catholic bishops facing sedition charges, along with the threats, harassment, trumped-up charges and even killings of members of the clergy and lay leaders of the Iglesia Filipina Independiente and the United Church of Christ in the Philippines.

Atty. Edre Olalia, NUPL National President, stated that “domestic remedies have proven to be by and large unduly prolonged, inadequate or ineffective in providing independent investigation and decisive prosecution of State perpetrators of human rights violations.”

“Even lawyers and judges find themselves victimized and caught up in the worsening climate of impunity in the country. The law is weaponized against political dissenters and critics of this administration, and legitimate political activity or advocacy is criminalized,” Olalia added, who also pointed out the vicious and relentless vilification against NUPL and its members.

Burgos said that EcuVoice member organizations and allies will be providing more and even supplemental submissions before January 31, 2020, the deadline set by the Office of the High Commissioner on Human Rights, on the situation of indigenous peoples, journalists and other rights defenders, as well as on violations of economic and socio-cultural rights under President Duterte.#