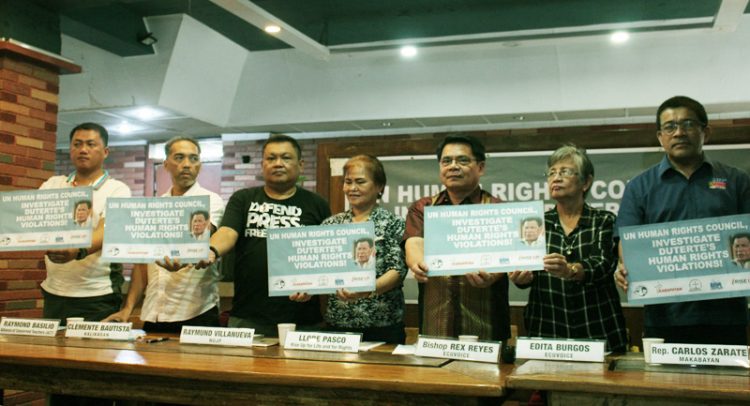 The UNHRC resolution on the Philippines: A time of reckoning shall soon come

The National Council of Churches in the Philippines (NCCP), as a co-convener of the Ecumenical Voice for Human Rights and Peace in the Philippines (EcuVoice), has engaged in international advocacy and lobbying, including in the UN Human Rights Council, in relation to human rights violations in the Philippines since 2008. In light of the dismal human rights situation under the government of President Duterte, the NCCP, along with other human rights organizations, lobbied the UNHRC and its member states vigorously because domestic remedies have failed and we are compelled to seek to justice for victims and survivors as well as accountability from those responsible for such violations.

The UNHRC resolution on technical cooperation and capacity building for the promotion and protection of human rights in the Philippines falls short of our expectation. Truth be told, it does not mirror the findings and recommendations in the report of the UN High Commissioner for Human Rights. This is most apparent in that it does not answer our fervent call for an independent international investigation. Still, this resolution does not exonerate the Philippine government from accountability for its many human rights violations among its citizens. It is, in fact, an acknowledgement that there is a serious human rights problem in the country: a crisis that is not being adequately addressed by the Philippine government.

Furthermore, we are disappointed that the resolution does not guarantee the entry of UN Special Rapporteurs and other special procedures to the Philippines. For example, this means that the new Special Rapporteur on the rights of indigenous peoples, Jose Francisco “Pancho” Cali Tzay, will not necessarily be allowed to see first-hand the plight of the Lumad in Haran, a church-declared sanctuary of the United Church of Christ in the Philippines (UCCP). As such, his much-needed assistance in correcting the false accusations made by Sec. Carlito Galvez that Haran, a church ministry, is allegedly being used by communist rebels to solicit support from international donors, can still be impeded by the Duterte administration.

This latest resolution only strengthens our call for the Philippine government to stop the killings and other human rights violations. We will maximize any venue opened by this resolution that can advance the pursuit of justice for the victims and survivors of human rights violations; however, we will continue to advocate for an independent international investigation. The NCCP is resolved to uphold God’s gift of human dignity. We will pursue our work with other rights defenders and with the international ecumenical community to engage with UN human rights mechanisms, the International Criminal Court, various governments and intergovernmental forums, so that those who violate human rights and undermine civil liberties will face justice and be held accountable for their transgressions. A time of reckoning shall soon come and God will “…let justice roll down like waters, and righteousness like an ever-flowing stream” (Amos 5:24).