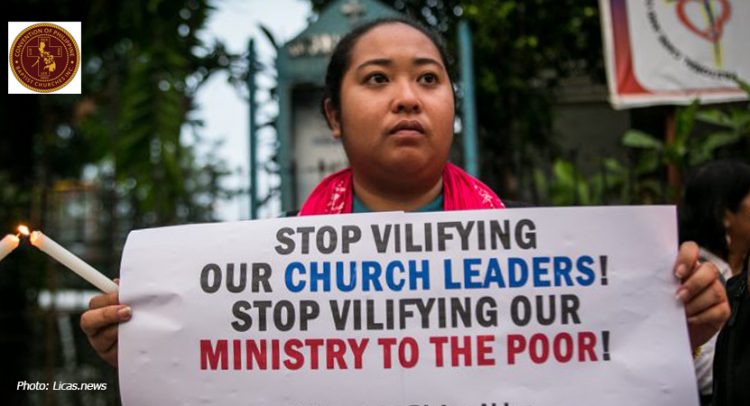 (A Statement of the Convention of the Philippine Baptist Churches)

“Let us make every effort to do what leads to peace and mutual edification.” – (Romans 14:9)

The Convention of Philippine Baptist Churches has always been unwavering in its commitment to promoting life and upholding human rights because these lie at the very core of its mission and life as a Church, the Body of Christ. Lately the vilifying and red-tagging of celebrities, legislators, and churches initiated by an agency of our country’s defense force that was created to serve, secure and protect the people has become a grave concern for us and caused us to fear for the lives of those who are in the forefront of the Church’s mission. It is a reality in our country that the red-tagging is a prelude to persecution and summary execution, and with the IRR of the Anti-Terrorism Act now out, a cloud of doom is cast on the Philippine landscape.

We believe that it is the church’s sacred task to uphold life and defend the dignity of every person who is a child of God and a bearer of God’s image by speaking out against structures that cause the desecration and abuse of this dignity. Vilifying and red-tagging those who advocate for the freedom to express their religious beliefs and pursue ministries consistent to what they believe God calls the to do is a curtailment of the fundamental freedom enshrined in the Bill of Rights of our Constitution.

We stand with those who, by their selfless efforts to serve the least of our sisters and brothers, are vilified and made objects and victims of violence and repression. The pandemic revealed the stark reality of the unevenness and asymmetry of our world; the worst hit, as in the many disasters that ravaged our country, are the poor. This could have been the time when these conditions are addressed in a compassionate manner, using resources we have. But it seems that, with the passage of R.A. No. 11479 known as the Anti-Terrorism Act and its Implementing Rules and Regulations bearing Constitutional infirmities, what was chosen was the least desirable and most destructive way, leaving no room for us to sit down at the table of truth and justice, love and reconciliation.

As a Church, we have consistently prayed for the dawning of that day when each one’s humanity is respected…where serving the Lord means courageously speaking out for just and lasting peace.

We, therefore, call on the government for an end to the red-tagging, redbaiting and vilification campaigns against churches that exercise their prophetic ministry, the human rights defenders who choose to stand with the most vulnerable sectors, the legislators who seek that our government would really be for the people, and all those selfless others who go out of their way to live a meaningful life by serving others.

We appeal further that any form of attack be stopped, and that instead the government choose the way of principled negotiations to address the ills of our society that give rise to the armed insurgency.

It is our hope and fervent prayer that we will all find in our hearts that spark of divinity and humanity that connects us to one another, so that we can truly heal as one and live in harmony and peace. Our righteous God deserves no less.

The UNHRC resolution on the Philippines: A time of reckoning shall soon come