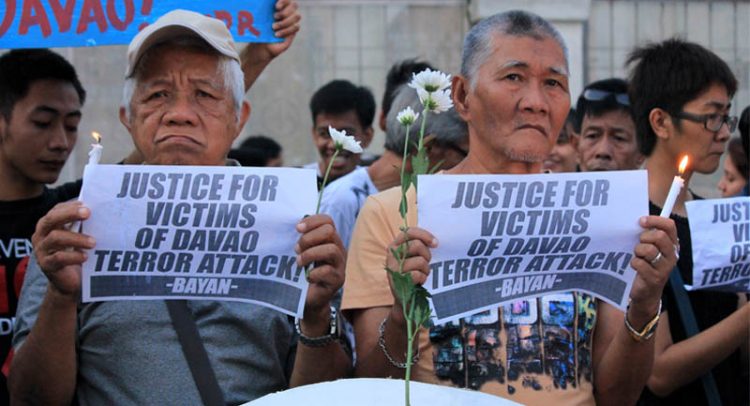 O Lord, you will hear the desire of the meek; you will strengthen their heart, you will incline your ear to do justice for the orphan and the oppressed, so that those from earth may strike terror no more. (Ps. 10:17-18)

The National Council of Churches in the Philippines (NCCP) strongly denounces the senseless and inhumane bombing of a night market in Davao City last September 2, 2016. We resoundingly express our righteous indignation at such an attack against unarmed, peace-loving civilian community.

This terroristic act that claimed the lives of 15 people and injured 71 was senseless and brutal. It has no respect for life and in the ultimate is an affront to the Creator and Author of Life.

We understand the declaration of the President on the country being placed under a state of lawlessness given the urgency of the situation. This is guaranteed in the Philippine Constitution as a prerogative of the President warranted by an emergency situation. However, we call on President Duterte to make public the parameters and scope of the declaration so as not to be subjected to abuse and manipulation of power by state forces. Let the public understand the nature and the specifics that will govern the declaration. Making this known to the public will remove fears and doubts that this will eventually lead to martial law. Further, we call on the government to ensure that the people’s civil liberties and basic freedom is upheld at all times.

We call on our churches, partner organizations and networks to lift the families of the fatalities in our collective thoughts and fervent prayers at this most difficult and trying times of their lives. We also pray that societal institutions be empowered as they bring to justice those who are involved in this act. We implore the God of Peace and Justice to work with us and through us, and the institutions and machineries in our society, so that the perpetrators of this gruesome action be swiftly put before justice.

We call on all peace-loving Filipinos to unite and transcend color, political persuasions, and beliefs or creed, in order to pursue justice and peace and promote respect for human life and dignity. In so doing, we usher in God’s promise of life in all its fullness.

May the God of Light bestow upon our government leaders the wisdom to discern the root of this violence and perseverance to pursue necessary actions to address the situation. May the Loving Arms of God keep our people united and vigilant as we together overcome another difficult time in our nation’s history.###