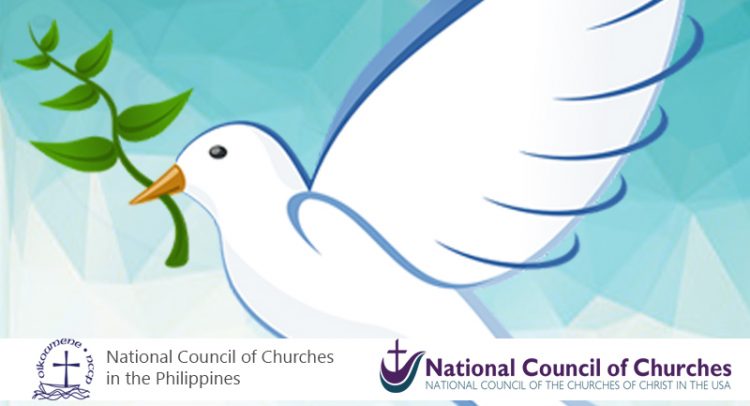 A joint statement on peace in the Philippines

“And the seed whose fruit is justice
is sown in peace by those
who make peace” (James 3:18).

The National Council of Churches in the Philippines (NCCP) and National Council of the Churches of Christ in the USA (NCCC-USA), bound by our faith in Jesus Christ and our common witness for the fullness of life, reaffirm a shared commitment to support the formal peace talks between the Government of the Republic of the Philippines (GRP) and the National Democratic Front of the Philippines (NDFP). We uphold peace as the hope of all people and the formal peace talks as a platform and venue for principled negotiations to strive toward the attainment of this peace. As a platform, the peace talks aim to define concerns, resolve the roots of the armed conflict, and forge what all parties long for – a just, durable and sustainable peace. As a venue, government and all stakeholders gather to negotiate and resolve both historical and contemporary outstanding issues.

As Councils of Churches, we hold firm that the negotiations between the two parties are not simply the silencing of guns through ceasefire or surrender. An active pursuit of justice and meaningful change for the majority of the people leads to a negotiated peace settlement that is truly transformative as it addresses the roots of the armed conflict – poverty, landlessness, inaccessibility to services and the inequitable distribution of resources. This also means instituting socio-economic and political reforms in the country.

As the road to peace is long and arduous, fraught with dangers, we believe that peace advocates must work hand-in-hand to accompany both parties in the difficult task to achieve a just and lasting peace in our lifetime. This is why the religious community in the Philippines has advocated the formal peace talks since the beginning.

We are saddened by the current setback in the negotiations. The fifth round of formal peace talks between the government under the administration of President Rodrigo Roa Duterte and the NDFP did not push through in Noordwijk, The Netherlands. We are troubled with the recent pronouncements by President Duterte that the government is abandoning the peace negotiations with the NDFP and will order the arrest of previously freed consultants. He also said that he is ready to sign the letter of termination of the peace talks. The possible scuttling of the peace talks may also spell the non-release of many political prisoners still languishing in various jails around the country, including Bishop Carlo Morales of the Iglesia Filipina Independiente and NDFP Peace Consultant Mr. Rommel Salinas who were arrested on trumped-up charges on May 11, 2017.

We urge the GRP and the NDFP to stay the course and continue the formal peace talks. Recent setbacks only further support our call for both parties to continue the conversations to pursue the negotiations. Great strides achieved in the last few months should be proof enough that talking to each other is the best way to clear matters.

We invite our sisters and brothers in the international community to join us in monitoring the peace process in the Philippines and join us in our call for both sides to respect and honor all obligations agreed upon previously.

We continue to encourage the United States of America to remove the Communist Party of the Philippines and New People’s Army, both members of the NDFP, from its list of foreign terrorist organizations and to openly support the peace negotiations in the Philippines.

The continuing Martial Law of the Philippine Government is worrisome, especially as no less than President Duterte himself has said that based on the past, Martial Law has brought the country nowhere. And though we support a campaign against the drug menace, we must insist on the rule of law rather than any of the controversial means that were raised by concerned states during the Universal Periodic Review on the Philippines by the United Nations Human Rights Council.

As the Philippines continues to face significant challenges, we are resolved to work hand-in-hand as peace advocates in supporting the GRP-NDFP Peace Talks. Our fervent prayers surround the Philippines, and all those who work for peace in this nation.

A joint statement on peace in the Philippines_PDF

Make every effort to do what leads to peace