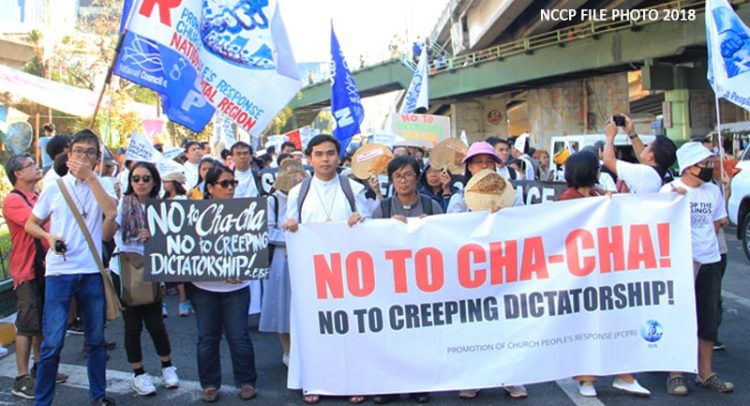 “When the righteous increase, the people rejoice, but when the wicked rule, the people groan.” (Proverbs 29:2, ESV) or

The National Council of Churches in the Philippines enjoins everyone to remain vigilant in the possible railroading of an “Economic Cha-Cha”. The initiative to amend or revise the 1987 Constitution in the midst of numerous urgent and pressing concerns in our nation is utterly untimely and highly suspect. All efforts must be concentrated on the aid and rehabilitation of the Filipino people who are still reeling from the impacts of the COVID-19 pandemic as well as the successive natural calamities which ravaged many of our communities last year.

For the nth time, the NCCP remains resolute on its stand that while the 1987 Constitution is far from perfect, removing the remaining safeguards in the Charter in order to allow the unhampered flow of “foreign capital investments” at this time as provided in Resolution of Both Houses (RBH) No. 2, is something that we do not need as this will only push our people further into the margins. Such moves offer Filipinos’ welfare and legitimate needs to the altar of profit of big foreign businesses. The oversimplification that ChaCha and foreign investment will sort out the current economic crisis, fails to address the deep-seated socio-economic problems in our country. Our lawmakers must instead prioritize crafting legislation that will help in stimulating the national economy through helping micro small and medium enterprises (MSMEs), boosting regular jobs for Filipino workers, developing agriculture by investing in farmers and agricultural support systems, and providing aid to the people that will enable them to spend in their communities.

Moreover, this tinkering with the 1987 Constitution may open up to more changes that will undermine our national sovereignty, the Bill of Rights, and other checks and balances that are our guarantees for a truly democratic society. Lawmakers with self-serving interests may also tamper with the restrictions on term extensions which can result in a “no election” scenario in 2022.

The people have a reason to be wary of the recent moves in Congress. Done at a time when the grim spectre of a more authoritarian rule seems to loom on the horizon, we cannot allow Charter Change to see fruition. In 2020 alone, we have seen how the Anti-Terrorism Law was railroaded and how the franchise of ABS-CBN was not renewed by lawmakers loyal to the President, despite overwhelming public outrage. Putting forward the interest of the majority, among any other agenda should be the central motivation of our leaders.

The NCCP calls on the people to continue rejecting moves to tamper with the 1987 Constitution. We encourage everyone to lobby their district and party-list representatives to oppose this untimely move. We invite every peace-seeking Filipino to remain vigilant and reject any legislative move that will threaten the constitutional rights of Filipinos. Let us all continue to call on the government to focus on what is emergent: a genuine, scientific, and people-oriented approach to the global COVID-19 pandemic and the economic predicament we are in.