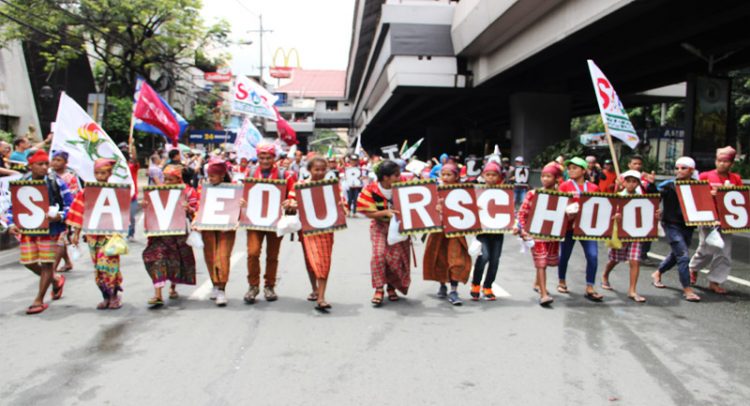 Manila, Philippines—The National Council of Churches in the Philippines (NCCP) condemns the violent intrusion of the elements of the PNP Regional Office in Cebu into the University of San Carlos-Talamban Campus where the Lumad Bakwit School is taking refuge. On February 15, 2021, the PNP barged into the campus in an alleged “rescue operation” for minors allegedly kidnapped by progressive groups.

“This intrusion of the PNP is clear manifestation of this government’s disregard to the rights and lives of our indigenous peoples, especially the Lumad children who are already under constant and intense distress since they have been uprooted from their ancestral lands on several occasions.” said Bishop Reuel Marigza, the General Secretary of the NCCP.

“This is not the first. They did the same to the Lumads who have sought a safe place in the United Church of Christ in the Philippines (UCCP) Haran Center in Davao. In their quest for a more peaceful place, away from their military-occupied ancestral lands, the Lumads have no choice but to flee and go to places where they feel that they are safe. It is just abhorrent and unacceptable for us churches to see the government’s relentless attacks to their lives and communities,” Bishop Marigza added.

The setting up of Lumad Bakwit Schools has been a collective response of the indigenous peoples on the intensifying militarization and land grabbing of Lumad communities in Mindanao. The Bakwit schools have been set up by the elders of the communities, NGOs and churches to assert their children’s right to education.

“NCCP firmly believes in the inherent worth and dignity of children. They are God’s gift and are valuable members of the human family. Thus, the NCCP upholds its commitment to protect and defend children’s rights,” Bishop Marigza added.

“The violent raid in Cebu showed us how the Government can conveniently assault our national minorities even under the care of sanctuaries and havens in the guise of ‘rescue operations’”, Bishop Marigza said. “This pseudo ‘rescue operations’ is clearly a violation of the rights of our Lumad children and their teachers and to the whole Lumad communities who have suffered decades-long struggles in defense of their ancestral land, life and their education,” Bishop Marigza averred.

The NCCP is in solidarity with the Lumad children in their struggle for their land and their rights to education. “We join the call to end militarization in Mindanao and to save Lumad schools. We likewise call for the safe and immediate release of the 25 students including their elders and their teachers who were illegally detained from this violent police raid”, the Bishop concluded.

The NCCP is the largest aggrupation of mainline Protestant and non-Roman Catholic churches in the Philippines.#