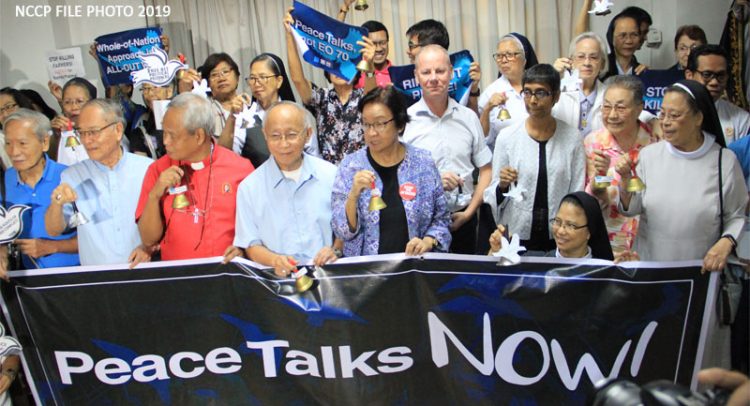 The clergy, the religious, and the lay from various denominations and across generations cannot stand idly by watching the reign of terror, due to draconian measures imposed, to continue spreading faster than the unseen virus that has devastated economies and caused untold suffering to the millions of the vulnerable in the Philippines.

The breakdown of the GRP-NDFP peace negotiations has contributed significantly to the increase in human rights violations and the worsening climate of impunity in the country. With the creation of man in God’s image, he also bestowed upon his people the gift of human dignity. Yet, those in power have repeatedly failed to prevent the desecration of that dignity and image.

The COVID-19 pandemic has also impacted the peace process between the GRP and the NDFP as the negotiations were supposed to resume after the successful backchannel talks toward the end of 2019.

Bringing back to the negotiating table the peace process would allow both parties to resume work on the halted Interim Peace Agreement that would pave the way for a final negotiated settlement.

On February 18 and 19, the Philippine Ecumenical Platform for Peace (PEPP) gathered the churches across the country in the virtual 9th Ecumenical Church Leaders’ Summit on Peace (ECLSP). Bishop Broderick Pabillo, the administrator of the archdiocese of Manila, said the peace summit marked the celebration of the 500 years of the coming of Christianity to the Philippine shores and the observance of the start of the Lent. Holding the event was also an occasion to affirm God’s redemptive plan for humanity manifested through the Lord Jesus Christ, the Prince of Peace.

At the conference, Labor Secretary Silvestre Bello, III (former head of the GRP Peace Panel) and Juliet de Lima, NDFP Interim Chief Peace Negotiator, expressed openness to the continuation of the peace process. Professor Ed Garcia (former peace envoy and policy advisor of International Alert and former member of the 1986 Philippine Constitutional Commission) and director of Caritas Colombia Monsignor Fabio Henao (also a member of the Committee of the National Peace, Reconciliation and Coexistence Council wherein he used to sit as its president in 2018-2019) shared their vast experiences in peace efforts in Colombia and other parts of the world. Of equal importance were the reports of the regional seminar groups from Luzon, Visayas, and Mindanao which raised the continued incidence of violence, summary executions, and arrests in the midst of this pandemic and worsening economic situation.

Peace goes beyond the silence of guns to the active presence of justice, right relationships with others, and the rest of creation. It is tangible and manifested through food on the table, decent jobs, and wages, clothing, shelter, education, and access to basic needs. (cf. Mathew h:32ff)

Peace with justice means people living sustainably in their communities without fear or threat to their lives and livelihood. (cf. Micah 4:4)

In his talk, Prof. Garcia said that the quest for peace continues to call and challenge the church to ‘’reimagine the process, rediscover our moral courage, and reinvent our resistance.’’

In this light, the church is encouraged to carry out these various roles of religious leaders in peace-building: to start with our faith-based principles as disciples of Jesus Christ who became one of us to share the gift of human dignity; to accompany the people in their daily lives and struggles, particularly the victims of violence, and work for a people-centered peace agreement; to foster and encourage dialogue between warring groups, working for reconciliation based on Justice and Truth; to work ecumenically with other faith communities as well as with many other civil society organizations engaged in the peace process; and to be prepared to sustain our efforts over the long term, always keeping alive our Hope in the Lord of History.