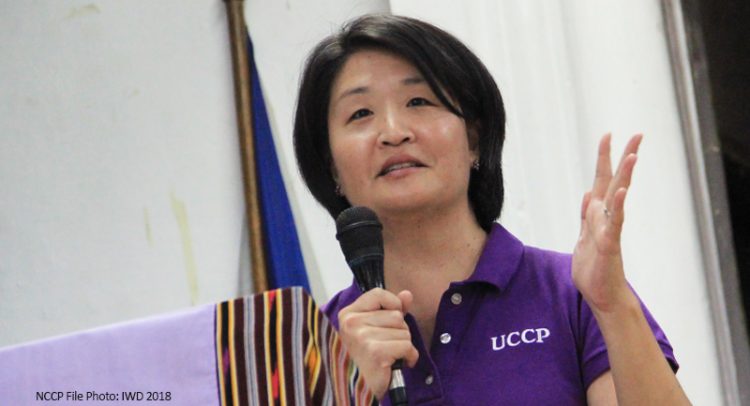 The National Council of Churches in the Philippines (NCCP) is one with our member church, the United Church of Christ in the Philippines (UCCP), in strongly condemning the recent red-tagging against Rev. Cathy Chang, a mission co-worker of the Presbyterian Church USA (PCUSA). According to the UCCP Council of Bishops’ statement, in the early evening of April 11, there were stickers and tarpaulin at her home in Quezon City, with her photos and accusations of “Supporter of Terrorist CPP-NPA-NDF” and threatened her to “Get Out of the Country.” NCCP stands in solidarity with her and her host, the UCCP, as we denounce this malicious maligning of her work and ministry to the Filipino people. We extend our heartfelt prayers for her safety.

Rev. Cathy serves as the Regional Facilitator for Addressing Migration and Human Trafficking in the Asia-Pacific and is a staunch partner of the NCCP in our ministry for the rights and welfare of our migrant sisters and brothers. In so many ways and on various occasions she has extended her deep compassion and pastoral care for migrants and trafficked victims through various platforms such as the Churches Witnessing with Migrants (CWWM) and the Philippine Interfaith Movement Against Human Trafficking (PIMAHT). Her missionary work has transcended into serving the grassroots migrants and the rest of the poor majority in the country.

The incident of red-tagging and harassment of Christian missionaries is not new. Under President Duterte’s term, missionaries of the United Methodist Church, Miracle Osman, Tawanda Chandiwana, and Adam Shaw were harassed during their solidarity visits with the Lumad in 2018 and were blacklisted and deported. The same thing was done against Sr. Patricia Fox, an Australian nun and a member of the Congregation of Our Lady of Sion, who has been serving the poor peasant farmers for more than twenty years. She too was vilified and was forced to leave the country. More recently, there was Otto Rudolf de Vries, a Dutch missionary immersed with the workers and worked for the rights of Filipino laborers, whose visa was canceled. Intensified vilification through red-tagging has been an endemic practice of the government, especially to those whose hearts and services go to marginalized communities and sectors of society.

The NCCP calls on the government to immediately put an end to red-tagging, especially among missionary workers. Stop maligning Rev. Chang’s work and others who have decided to serve the Filipino people in such a time when acts of solidarity are needed the most. We also urge our member churches to hold Rev. Chang in prayer, and all those who have been experiencing such forms of harassment, and continue walking and witnessing with them in the quest for shalom. To Rev. Cathy Chang we offer these words of encouragement from scripture: “Be strong and courageous. Do not be afraid or terrified because of them, for the LORD your God goes with you; he will never leave you nor forsake you (Deuteronomy 31:6)”.

A Call to Nationwide Prayer and Action for a Clean, Honest and Peaceful Election