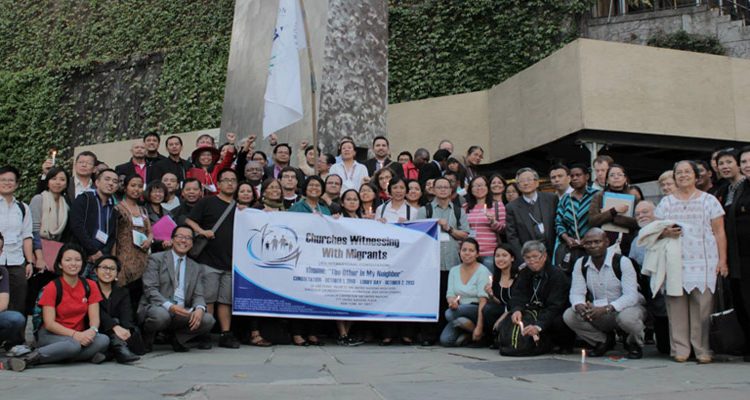 The Churches Witnessing With Migrants (CWWM) is an international platform for advocacy and forthright action focused on global migration, particularly forced migration in all its forms. We are organized as a tripartite body of equals that includes migrants and representatives of migrant-serving and faith-based organizations from various faith traditions. In our practice of a tripartite arrangement, we have come to value working together and inclusively on acts of mercy, accompaniment and justice.

The CWWM has three-pronged objectives/strategies: analysis and theological reflection, advocacy, and movement building.

Since the first meeting of the CWWM in Manila in 2008, the agenda and breadth of concerns have expanded to include the diverse forms of migration including labor migration, undocumented migrants, refugees, human trafficking etc. The unifying theme is that of forced migration where it is understood that people are forced to migrate by oppression and conflict and also by the lack of opportunities in their home countries that result from global inequality and injustice.

The National Council of Churches in the Philippines (NCCP) and Migrante International initially conceived CWWM. From the three initial smaller consultations held successively in Manila, Athens, and Mexico, to the larger international consultations held in New York (October 2013), Stockholm (May 2014), Istanbul (October 2015), and Dhaka (December 2016), participation has considerably grown. The New York, Stockholm and Istanbul Consultations produced the framework documents of CWWM. In Dhaka, the organizational orientation and structure of CWWM was finalized.