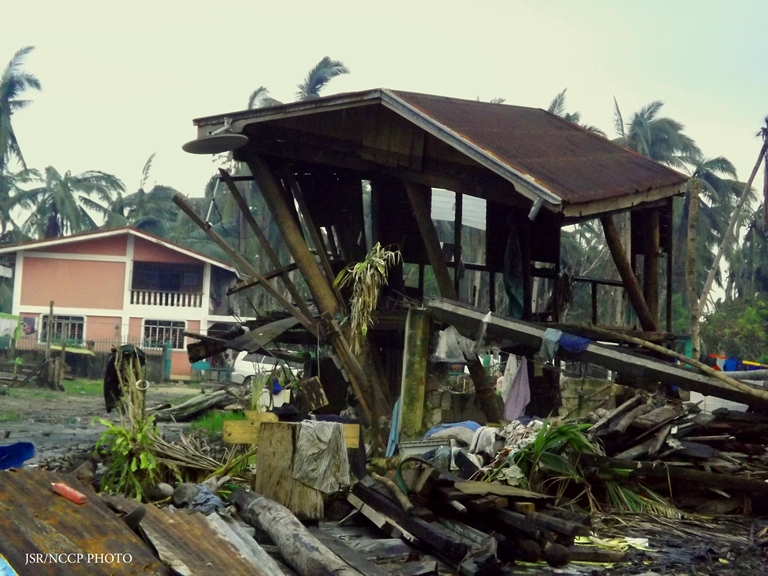 A time to rebuild and start a new 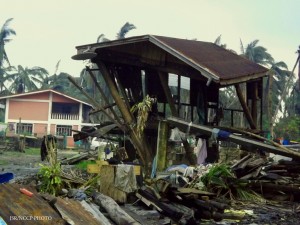 A month after typhoon Yolanda (Haiyan), I was asked by Ms. Minnie Anne Calub, Project Coordinator of the NCCP-ACT Alliance Relief Operation, if I would like to come with them to Tacloban.   Instantly, I said “Yes,” since it was actually my wish to go there.  For two years of doing photo/video documentation for the NCCP, it has become instinctive for me to be in every activity whenever possible.

Though I was happy that my wish was granted, deep inside, I feel a little frustrated.  A month has passed and probably everything has already gone back to normal.  Quite a long time has elapsed and my chances are slim in capturing images and footages of the typhoon’s onslaught.

A month has passed and yet the destruction the typhoon wrought is still very much visible.   It is as if the city was ravaged by war — roofless houses, debris of concrete walls and fences, shattered glasses from windows and vehicles, wood and iron sheets — are everywhere.  Trucks were overturned by the roadside and garbage are still strewn on the highway.  The air reeks of foul smell brought about by decaying carcasses. 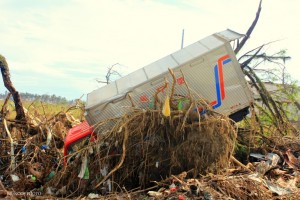 It was midday when we finally arrived at the Relief Center hosted by the UCCP Tacloban.  By that time, our team for relief distribution has already left.  Once again, I will not be able to capture the momentous smile both from the giver and the recipients of relief packs that have been lovingly packed by volunteers.

The sun was setting when I decided to walk on the streets around the relief center.  Mixed feelings of excitement, fear and sadness was creeping inside me.  I was thinking, “Am I ready to see a cadaver that may still be lying on the streets?  Or, am I going to click my camera on a sorrowful scene or situation?” 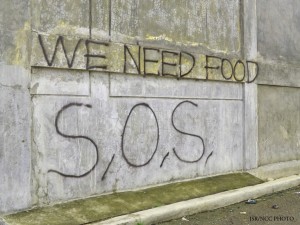 As I continue to walk, I could hear people shouting calling for food and help.  On one side of the street, children and adults were rummaging through the garbage looking for some useful items that may still be worth selling.  On the other side, some are starting to light up a fire to cook dinner.  Electric power has not yet been restored in the city.

Curfew is carried out from 8 o’clock in the evening till 5 in the morning.  My first night was dark and quiet except for the whir of generators which a few homes have.  Hardly could I sleep as my mind kept on replaying the scenes I saw earlier in the day.

Early next morning, I went out in the bay area which is now a temporary dumpsite.  Towards the east, the sun is slowly rising, forcing its way from the clouds with its rays.  I can see the rays’ reflection on the calm and quiet dark blue water of the sea.

On the far end of the quay, an old man was fishing.  I walked to him to strike up a conversation but he only gave me a smile in return.  I watched him for a time and I was surprised how it was easy for him to catch fish as if the fish are just waiting for the bait.  As I don’t want to disturb him anymore I started to head back to the center.  Having not gone far, I turned around and took a photo with my camera. 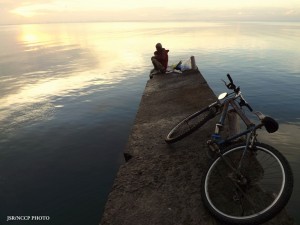 I may not have a word from the old man but truly there is a time for everything.

A time to mourn and weep…

A time to rebuild and start a new…

Human Rights is about Human Dignity

Yolanda Isn't Over Yet