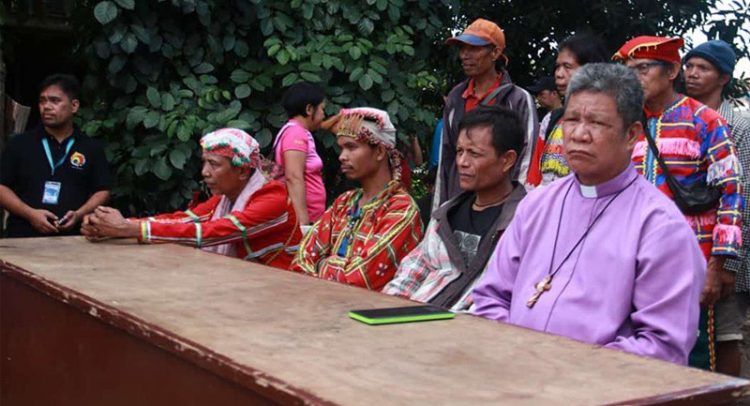 “Because of the oppression of the weak and the groaning of the needy, I will now arise, I will protect them from those who malign them.” (Psalms 12:5)

The National Council of Churches in the Philippines strongly condemns the attack, harassment and intimidation against the Lumads seeking refuge in the United Church of Christ in the Philippines (UCCP) – Haran compound in Davao City on 25 January 2020. The Council decries the resolution of the Region XI Regional Peace and Order Council (RPOC) that demands the closure of the church compound.

On the morning of January 25, members of the paramilitary group Alamara and suspected State agents in civilian clothes broke into the UCCP Haran Mission Center, which is accommodating at least 500 Manobo Lumad evacuees including 236 children and infants, and tore down its walls. The evacuees had to move to the UCCP office building for refuge. It was also reported that the perpetrators were carrying placards vilifying UCCP. At noon, despite the attacks, intimidation, and destruction of property, the PNP did not arrest the perpetrators.

Ten days before the incident, the Region XI RPOC issued a resolution demanding the closure of the UCCP Haran Mission Center for accommodating the Lumad evacuees. According to the Philippine News Agency, Davao del Norte Gov. Edwin Jubahib, who moved for UCCP Haran’s closure, said that the evacuees in the facility are being exploited by the communist movement for “various terroristic activities”. This is an unfounded and baseless accusation.

The NCCP considers the resolution an appalling vilification against the Christian mission of the Church to serve the people. It also denounces the vicious acts of harassment, intimidation, and attempts of closure of the UCCP Haran. We vehemently condemn this attack and violation of the Lumad’s right to safety and sanctuary. That such blatant harassment could happen in broad daylight reprehensible. What is more troubling is the inaction of the PNP despite the evident attacks in the church compound.

The Council fully supports UCCP-Southeast Mindanao Jurisdictional Area in its firm stance against the resolution. We laud UCCP Haran for being faithful to its ministry of providing sanctuary for internally displaced indigenous people since the 1990s. This is a concrete response to the imperative of our faith to open our doors and serve those in distress.

Over many years, the NCCP and its member churches have extended support to the Lumad communities of Mindanao. We reaffirm this commitment and continue to lift our voice with the Lumad in their call for the end of militarization in their ancestral lands and attacks to their communities. We call on the government and its forces to put an end to these acts of violence against the Lumad and the church people.

In the spirit of ‘bayanihan’, let the people serve!