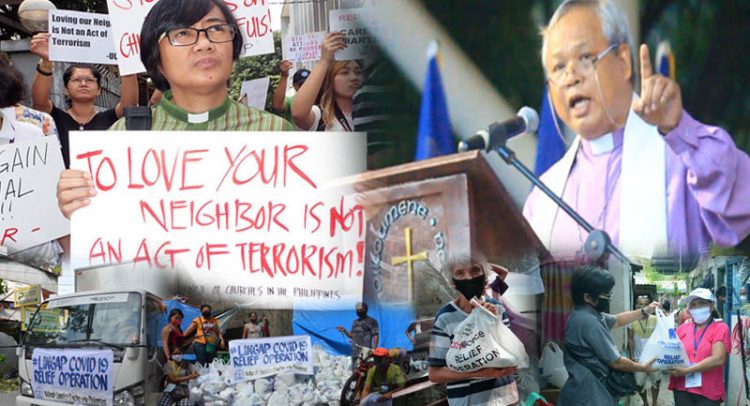 Christ’s mission shall not be vilified and red-tagged!

“Blessed are you when people revile you and persecute you and utter all kinds of evil against you falsely[b] on my account. 12 Rejoice and be glad, for your reward is great in heaven, for in the same way they persecuted the prophets who were before you.” Matthew 5:11-12 , ESV

We reiterate our call to the administration of President Rodrigo R. Duterte to stop the vilification and red-tagging of its critics, members of civil society including churches and church people, and even celebrities. This call comes on the heels of the public hearing of the Senate Oversight Committee on National Defense and Security, Peace, Unification and Reconciliation convened by Sen. Panfilo Lacson. The relentless red-tagging of personalities and social media sites connected to the National Task Force to End Local Communist Armed Conflict (NTF-ELCAC)is a very alarming   since in the country, it is often a precursor to more serious human rights violations, including extra-judicial killings.

Red-tagging is a threat to the people’s basic right and fundamental freedoms. The creation of the National Task Force to End Local Communist Armed Conflict under Executive Order 72  degrades the well-meaning organizations and civilians in doing their work for the community. The NTF-ELCAC only exacerbates the already growing human rights crises in the country, putting danger to  the lives of human rights defenders, church leaders, journalists, lawyers, academics and even concerned civilians.

This is not the first time that religious groups like the NCCP experienced this kind of malicious and unfounded labelling. During the time of Martial Law and that of succeeding administrations, most especially during the administration of former Pres. Gloria Macapagal-Arroyo, the government, particularly the military, have resorted to similar attacks. Aside from the preposterous accusations of NTF-ELCAC’s so-called witness, Jeffrey Celiz, certain Facebook pages identified with the said government body, have red-tagged our leaders and members, including our General Secretary. Such smear campaigns not only endangers their lives but also creates a climate of fear among the people and communities they selflessly serve.

We reiterate that red tagging short circuits the fundamental process of democratic discourse and violates due process especially as it curtails, among others, the freedom of expression. It is thus unfair to NCCP as it is to all others—persons or civil society organizations—to be red-tagged  because of their advocacies and indefatigable solidarity with the people’s struggles. We assert that “…red-tagging NCCP violates our right to the exercise of the freedom of religion, indeed to the exercise of ministries in furtherance of our religious beliefs. Such freedoms are at the core of the Bill of Rights of the Philippine Constitution. Any such practices that red-tags and vilifies legitimate ministries such as NCCP’s albeit in the context of the government’s counter-insurgency program …subverts the majesty of democratic governance”

Since our founding in 1963, we have been grounded in Christ’s mission, doing common witness and responding together to the needs and concerns of the people. We are committed to unity and reconciliation and the promotion and protection of human rights. We work with churches and communities, impartial of their religion or beliefs, in order to deliver dignified humanitarian aid and other social services to the people, especially to the least of our sisters and brothers. Organizations like ours and our churches, should all the more be encouraged and supported especially in these times when our country is beset by natural calamities in the midst of a pandemic. Against all forms of persecution, we stand firm in loving God and serving our people. We are compelled to do our mission, for Jesus Christ himself proclaims that he is among us. He is the one who serves (Luke 22:27).

_________ 1 At a press briefing hosted by the NTF-ELCAC last October 30, a certain ‘Ka Eric” Almendras, who identified himself as Jeffrey Celizwas asked if there were religious institutions who are also identified to CPP-NPA-NDF, or recruiting for the said organization. He was caught mentioning the National Council of Churches in the Philippines along with its member churches Iglesia Filipina Independiente, United Church of Christ in the Philippines, Convention of the Philippine Baptist Churches in the Philippines, and the United Methodist Church. The Rural Missionaries of the Philippines of the Roman Catholic was also mentioned.
2 https://www.officialgazette.gov.ph/downloads/2018/12dec/20181204-EO-70-RRD.pdf
3 https://nccphilippines.org/2019/12/03/resolution-affirming-the-statement-of-the-nccp-officers-on-the-red-tagging-by-the-department-of-national-defense/
Share this article:
Previous Post