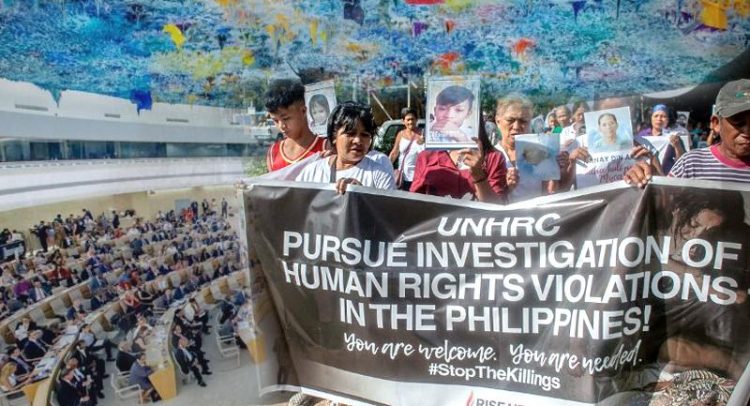 Rise Up calls on UNHRC: Pursue an independent investigation in the Philippines

Geneva, Switzerland: Countering President Rodrigo Duterte’s speech during the UN General Assembly that he will hold accountable those who have “acted beyond bounds” during operations of his ‘war on drugs’ campaign, Rise Up for Life and for Rights stated before the UN Human Rights Council (UNHRC) that “such diplomatic assurances fly in the face of widespread impunity and essentially nonexistent remedial actions”.

The Rev. Fr. Ritchie Masegman from Rise Up delivered the online oral intervention in partnership with the National Council of Churches in the Philippines through the World Council of Churches during the General Debate on Item 10 of the 48th Regular Session of the United Nations Human Rights Council last October 7, 2021.

Rise Up also echoed the call of many civil society organizations for the UN Human Rights Council UNHRC to call for “an independent investigation into the widespread and systematic killings and other human rights violations in the Philippines”.

Fr. Masegman expressed concern over the widespread impunity under President Duterte’s administration. He said that “such impunity continues to undermine the safety and human rights of Filipinos, especially those living in the urban poor areas.” The government’s war on drugs in actuality is a war against the poor.

“Even as families of victims of extra-judicial killings continue to bring evidence to the International Criminal Court of the crimes against humanity committed in this context, access to evidence and transparency has become increasingly difficult to obtain,” Fr. Masegman added.

This General Debate coincides with the report of the UN High Commissioner for Human Rights, Michelle Bachelet on the implementation of the resolution on technical cooperation and capacity building. In her report, she took note of the continuing human rights violations in the country and the absence of accountability for the killings and rights violations of the Filipino people, despite the presence of the three-year joint program on human rights in the Philippines.

A Call for Transformative Healing on the International Day of Peace