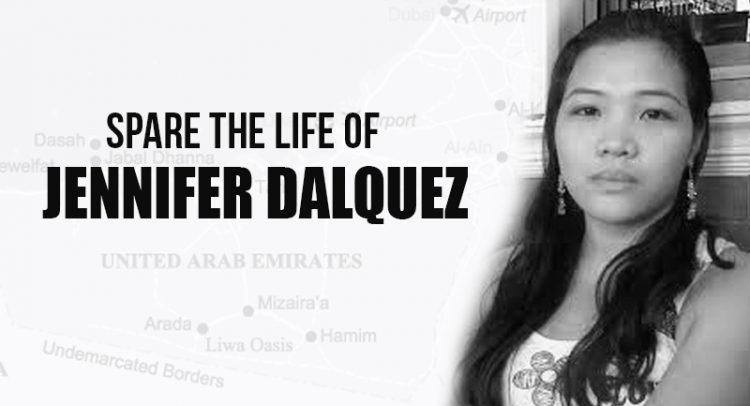 The National Council of Churches in the Philippines through the Churches Witnessing with Migrants joins the call to pray and support the bid to stay the execution of Jennifer Dalquez.

Dalquez, a 30-year old mother of two from General Santos City is facing charges of murder in the United Arab Emirates. In 2011, she left her employer after a failed rape attempt by the latter. She then sought another employer. In 2014, this employer along with two others attempted to rape her. Taught self-defense by her father, she staved off the attempt but stabbed her employer to death using the knife used against her.

We take the side of the vulnerable. Dalquez’s move was an act of self-defense. May her death sentence be commuted.

We hold on to the pronouncement of the government to do more to  protect overseas Filipino workers especially women. Unless measures are taken to protect them, their vulnerability to abuse remains high.

We will not grow tired in calling attention to the call for national industrialization among others as a way of keeping our people home. We will not grow weary in being critical of the government’s Labor Export Policy until it is more protective of Filipino workers.

Prayer and work are one. As the season of Lent draws near, we bid everyone to reflect on the ways we have been insensitive to the welfare of others. May we grow ever vigilant that these things which deny abundant life be things of the past.

No more to Filipinos forced to work overseas! May migration be a happy option!

May God have mercy on us all.

Sowing the Seeds of Peace in Mindanao: Statement on forging of Bilateral Ceasefire Agreement between GRP-CPP