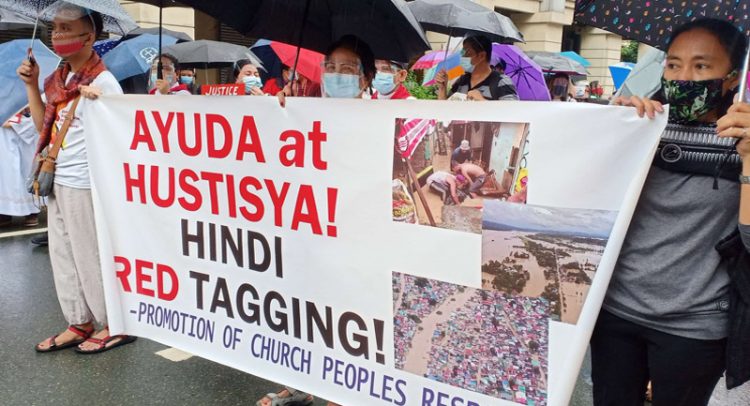 Quezon City–The National Council of Churches in the Philippines expressed its support to Senate Bill (SB) No. 2121 filed by Sen. Franklin Drilon penalizing state actors who practice red-tagging. “Along with the recent statement of the Supreme Court on attacks on lawyers and judges, we fully welcome this bill from Sen. Drilon as a positive initiative that hopefully can help reverse the trend of the constricting civic and democratic spaces in our country because of red-tagging,” Bishop Reuel Norman Marigza, NCCP General Secretary stated.

“Initiatives like Sen. Drilon’s Bill should be encouraged and supported especially in a context where human rights are attacked, and fear and insecurity constantly loom. The dangerous practice of red-tagging has victimized various organizations and individuals. We hope our lawmakers treat this Bill as a very urgent piece of legislation”, Bp. Marigza said.

Bp. Marigza stated that for the NCCP “red-tagging short circuits the fundamental process of democratic discourse and violates due process especially as it curtails, among others, the freedom of expression and freedom of association guaranteed in the Bill of Rights of our Constitution. It is thus unfair for any person or civil society organization to be red-tagged.

Churches and church-related institutions including its leaders and workers have not been exempted from red-tagging including NCCP and its member churches. Bishops, priests, pastors, and other church-workers have been vilified for their ministries. “Red-tagging churches and church-people violate our right to the exercise of the freedom of religion and to the exercise of ministries in furtherance of our religious beliefs. Any such practices that red-tags and vilifies legitimate ministries subvert the majesty of democratic governance”, the Bishop asserted.

The National Council of Churches in the Philippines is the largest aggrupation of mainline Protestant and non-Roman Catholic churches in the country. #