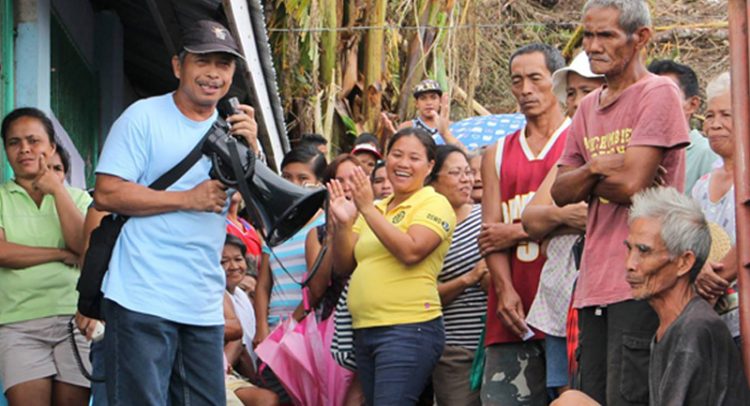 The National Council of Churches in the Philippines condemns in the strongest possible terms the arbitrary and unlawful arrest of Pastor Daniel “Dan” Balucio, 62, a minister of the United Church of Christ in the Philippines-South Luzon Jurisdiction. Pastor Dan was slapped with fabricated charges of illegal possession of firearms and ammunition. Currently, Ptr. Balucio is detained at the Sto. Domingo Municipal Police Station in Legazpi City. As a council of churches, we demand for his immediate and unconditional release.

Pastor Balucio is a staunch rights defender and humanitarian worker. He has been the coordinator of Andurog Mayon[1], an Ecumenical Disaster Response and Management Committee of the Bicol Regional Ecumenical Council (BREC) in Albay Province, since its establishment in the year 2000. Pastor Dan has been a reliable partner and coordinator of the NCCP-ACT Alliance in its humanitarian work in the Bicol Region. As a humanitarian actor, his leadership is deemed valuable and critical in conducting several humanitarian interventions to the most vulnerable disaster-affected families and communities over the years.

At around 3:30 in the morning of May 2, 2021, Pastor Balucio was seized from his home in San Isidro, Sto. Domingo, Albay by combined elements of the Criminal Investigation and Detection Group (CIDG) Bicol, CIDG-NCRFU, Military Intelligence, and the PNP-Special Action Force. The arresting group used a suspicious search warrant with an erroneous name, ‘Danilo Banalnal Balucio’, issued by Legazpi City Regional Trial Court Vice Executive Judge Edgar Armes. According to reports, around 30 elements of the police and military arrived in private vehicles, forcibly entered their residence at the Shannan Christian Academy, where Pastor Dan serves as the school administrator.

Pastor Dan, his wife and two children, and, Mr. Almond del Rosario, the Emergency Response Officer of NCCP – who was with them at that time for an ongoing humanitarian response – were led out of the house while the operatives went inside and rummaged through their belongings. It was only when the barangay captain and a kagawad came, 30 to 45 minutes after, that the search warrants were shown to Pastor Dan. The police and military then conducted another search for which guns, ammunition, a grenade and a red flag were allegedly found. In addition to that, two of the tires of NCCP’s vehicle that was parked outside the house, used for humanitarian missions, were punctured by the authorities.

This attack came at a time when Pastor Dan, together with other church people, are in full-swing implementing the humanitarian response of the NCCP-ACT Alliance in communities that were badly affected by Typhoons Rolly and Ulysses in November last year.

In a separate incident but similar modus, almost at the same time of Pastor Dan Balucio’s apprehension, Maria Jesusa “Sasah” Sta. Rosa, 20, spokesperson of Anakbayan’s regional chapter in Bicol region was also arrested in Naga City. These familiar accounts that maliciously implicate rights defenders, activists and individuals whom the State considers as enemies have become the norm under President Duterte’s administration.

In these trying times, we see these patterns of arrests and other rights violations as forms of repression. We firmly attest to the testimonies of our modern-day prophets being continuously attacked for their unwavering commitment to proclaim God’s love for all. Thus, we reiterate our call to the government: stop harassing our church workers and other rights defenders; and cease on vilifying our ministries with the poor and respect our prophetic stance in taking solidarity in the struggle of the majority. We also call on the Commission on Human Rights to conduct an independent investigation on these recent raids.

We appeal to all our member churches to raise the alarm to free and drop all fabricated charges against Pastor Dan Balucio. We also call on our international partners to continue to collectively keep watch and bear witness with us in the call for the respect and protection of human rights in the country. Until the time of reckoning, may we be reminded to tread on the heights as the Sovereign Lord is still our strength (Habakkuk 3:19).

[1] Andurog Mayon has been a consistent partner of NCCP in providing emergency assistance and rehabilitation support to thousands of beneficiaries impacted by other disasters that hit the Bicol region. These include typhoon Reming in 2006 and the recent eruption of Mayon Volcano in 2017.

Hands off Bishop Hamuel Tequis, Hands off our Church Sanctuaries