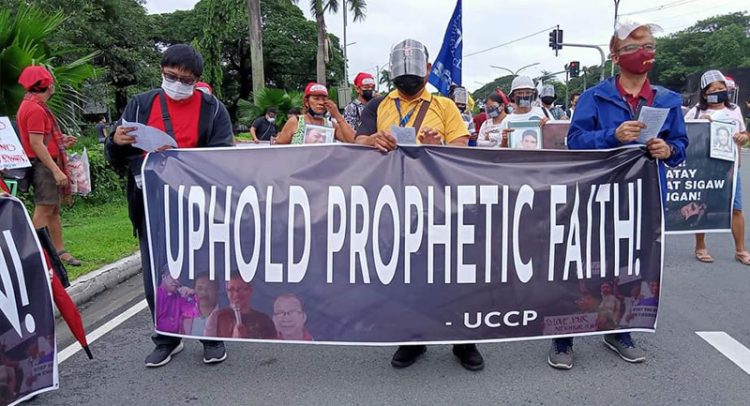 It has been five long grueling years since the people first welcomed his supposedly pro-people platforms of ending poverty, contractualization, and the drug problem in the country. Five years later and the highest hopes of the Filipino people for genuine change were replaced with a gargantuan international debt coupled with economic turmoil that made life more miserable for the already suffering people.

Peace and order was one of his primary agendas, but ironically, many urban and rural communities were terrorized by killings and other rights violations. The administration’s sham drug war took the lives of 8,000 to 30,000 – depending on the source, of alleged drug suspects. Just this June, the former Chief Prosecutor of the International Criminal Court, Fatou Bensouda, determined that crimes against humanity of murder have been committed against the Filipino people in the context of its anti-drug campaign.

Under his watch, there are 328 extra-judicial killings that have been committed against critics, rights activists, lawyers, environmental defenders, indigenous people, farmers, journalists, and even church people. The human rights situation worsened when the administration unilaterally terminated the formal peace negotiations with the National Democratic Front of the Philippines (NDFP) and the Anti-Terrorism Act was passed last year. The latter legitimize surveillance and unlawful arrests to ordinary citizens and undermines the due process of law. Red-tagging and vilification became ubiquitous and have seemingly served as permission for illegal detentions and killings. The Anti-terrorism Council then tagged NDFP as a terrorist group effectively trouncing on almost 30 years of negotiations and mutual agreements.

Our Christian ministry was not spared from these attacks. Over the course of his administration, eight church people have been politically killed. Many church leaders have also been terror-tagged, surveilled, harassed, and vilified. In the last two months alone, three pastors from the United Church of Christ in the Philippines (UCCP) have been arbitrarily arrested and unjustly charged – Pastors Dan Balucio, Benjie Gomez, and Pastor Nathaniel Vallente. Fabricated charges were also filed against Bishop Hamuel Tequis and Rev. Daniel Palicte of South East Mindanao Jurisdiction of the UCCP. They manage HARAN Center, a sanctuary for the Lumad in Davao City which had its accounts frozen by the Anti-money Laundering Council and the ATC. The UCCP is not the only church that has been defamed. The Iglesia Filipina Independiente and church organizations like the Student Christian Movement of the Philippines and the Promotion of Church People’s Response, Rural Missionaries of the Philippines, and even the Roman Catholic Church have also been maligned among many others. The NCCP has been maliciously tagged twice under this current dispensation, and our General Secretary, Bishop Reuel Norman Marigza has also been red-tagged in various Facebook posts. The violations committed against the churches in the last five years under President Duterte’s government go against the right to the exercise of the freedom of religion and to the exercise of ministries in furtherance of the religious beliefs that includes development work and ministries.

Our church workers have been faithful to their pastoral duty to accompany the downtrodden, the poor, and the marginalized. Their unwavering stand against any attempt to suppress and oppress the people’s basic and fundamental rights makes them a target of a government that is intolerant to criticism.

The National Council of Churches in the Philippines affirms the Biblical and constitutional injunction that leaders of the land must heed the sovereign people whom they serve. Our healing as a nation comes from our resolute strength to hurdle and guide our flock towards a better transition of power through our national elections in 2022. As a Council, we must contribute to the united discernment of the people and add our prophetic voice to the Filipinos’ cry to alleviate our nation from this unbridled suffering. By taking our mission to heart, our collective effort and action can be instrumental in ending this decay and tyranny in our land.

At the core of this cry is the reality of hardships that Filipinos are facing, and the sober realization that genuine positive change will no longer be found under this administration. Our country is now in its darkest and most divisive years, and we cannot allow darkness and betrayal to hover over us again.

It is with the hope that we can end this fate that has befallen us. There has to be meaningful change.

NCCP-ACT Alliance Humanitarian Response to Multiple Disasters in the Philippines