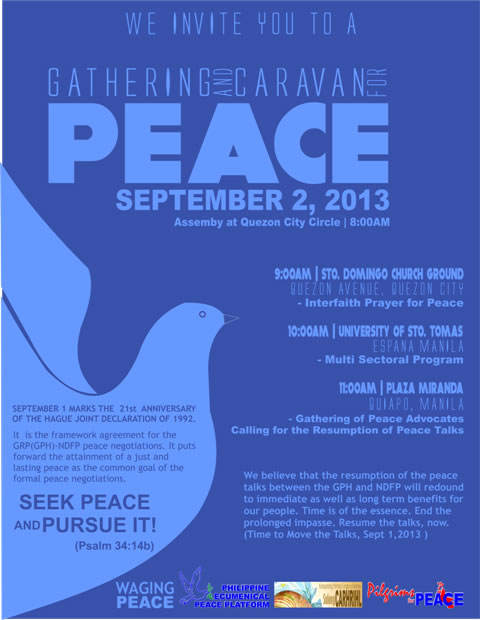 Call for JUST PEACE: Time to Move the Talks!

The NCCP, one of the convenors of the Philippine Ecumenical Peace Platform (PEPP) is one with other peace advocates to in its call for a Just Peace.  Last September 2, the NCCP joined the Gathering and Caravan for PEACE and called for the resumption of the peace talks between the Government of the Republic of the Philippines and the National Democratic Front as the peace advocates also commemorated the 21st year of the Hague Joint Declaration of 1992, the agreed framework for the Peace Talks.  Below is the joint press statement of the PEPP, Pilgrims for Peace, Waging Peace Philippines and Sulong CARHRIHL.

We view with deep concern the breakdown in the peace negotiations due to unresolved issues in both the regular and special tracks.  The regular track which involves the formal talks on the substantive agenda has been on an impasse mainly over the release of detained NDFP consultants.  The special track, which involves talks on a proposal for alliance and truce and is parallel and complementary to the regular track, is likewise stalled.

We believe that consistently honouring signed agreements builds on the trust imperative and the kind of peace architecture both Parties had mutually envisioned.  Hence, we call for the immediate resumption of the formal peace talks in accordance with the Hague Joint Declaration and other bilateral agreements.  The implementation of JASIG would provide conditions conducive to the resumption and continuation of the GPH-NDFP talks, specifically, safety and immunity guarantees for all those who participate in the talks, from either side.  The full implementation of CARHRIHL and the reactivation of the Joint Monitoring Committee (JMC) will help mitigate the impact of the armed conflict, deter human rights violations, provide redress to the victims and end the climate of impunity.

We are aware of the pressing need for social and economic reforms, which is the second item in the substantive agenda of the peace talks, geared to addressing the continuing hardships of our people, especially the poor and the oppressed.  It is incumbent on both Parties to immediately return to the negotiating table and work at reaching an agreement on these urgent reforms.  The two Parties are therefore urged to find ways and to take measures to resolve the issue on the release of detained NDFP consultants and thus break the current impasse.

We likewise urge the GPH and NDFP to resume talks on the special track to explore immediate and practical areas of cooperation such as upholding national sovereignty, agrarian reform and national industrialization alongside the cessation of armed hostilities.  We have confidence that simultaneous discussions on both tracks can mutually enhance the prospects of reaching constructive agreements.

We believe that the resumption of the peace talks between the GPH and NDFP will redound to immediate as well as long term benefits for our people.  We therefore commit ourselves to accompany the peace negotiations and contribute to the discussions on the substantive agenda in both regular and special tracks.  We shall continue to undertake and support all  efforts towards the attainment of a just and enduring peace throughout the land.

Time is of the essence. End the prolonged impasse.  Resume the talks, now.