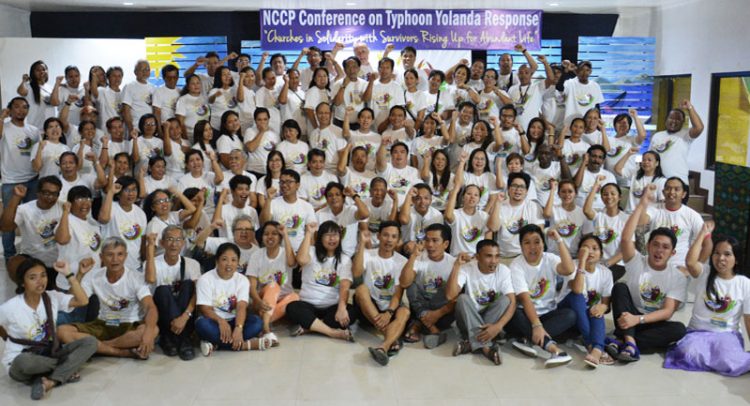 (Unity Statement of the NCCP Conference on Yolanda Response)

We, eighty one (81) participants from churches, faith-based institutions, people’s organizations and survivors from communities devastated by Typhoon Yolanda (international name Haiyan), have gathered from November 7-9, 2016 in Tacloban City for a Conference on Yolanda Response organized by the National Council of Churches in the Philippines – ACT Alliance (NCCP) under the theme: “Churches in Solidarity with Survivors Rising Up for Abundant Life” (John 10:10).

This gathering was a chance to reflect upon the past three years after the strongest typhoon to ever make landfall in recent history devastated many parts of Central Philippines. It was an occasion to celebrate the people’s efforts to rise up and rebuild, and for churches to proclaim and be witnesses to God’s redemptive work for humanity especially the poor and the marginalized. It was a time to thank the God of Life for the gifts of unity, partnership and the sharing of resources – from the local to the national, and the regional to the global levels. These partnerships were forged in order to provide a meaningful and unified humanitarian response through the provision of emergency relief assistance. These partnerships were honed in journeying with the people to build back towards more resilient homes and communities, but more importantly to build back towards better lives.

We affirmed that responses to disasters must not be simply acts of charity but acts of solidarity that support and defend the right of people to the resources they need to reclaim their lives with dignity.  It is in solidarity that we journey with the people not only in rebuilding their lives but also in claiming justice. Through this we give flesh to our discipleship and witness as churches (James 2: 1-7).

In our gathering, we listened to stories of the grim reality of disasters compounded by climate change on one hand, and stories of hope and resiliency on the other. We witnessed how the people became empowered through the accompaniment and solidarity of churches and other organizations, in order to rise up for their dignity and rights. We heard stories of transformation where people moved from being victims to becoming survivors, and from being survivors to becoming advocates for their collective rights. The message is slowly sinking in:  humanitarian aid is not a privilege but a basic human right.

We were reminded that three years after the tragedy, government has still not fulfilled promises of support made during the desperate moments of the disaster and that in many communities pervasive hunger and poverty among survivors remain. The legitimate demands of the people for food, shelter, agricultural and livelihood assistance, free public services especially in resettlement areas, a moratorium on projects and programs that threaten to displace survivors yet again, must be heard and heeded.

We came to understand more fully that the people’s clamor for justice is anchored on the idea that humanitarian aid is the primary responsibility of the State. The call for justice is a call that the past administration be made accountable for its criminal neglect during and long after the wake of Yolanda’s destruction.

We also learned that disasters similar to the magnitude of Yolanda’s severity will become norms in the future. This is brought about by climate change as a result of global warming that primarily affects poor and vulnerable countries like the Philippines. The impact will be more severe on the vulnerable sectors already plagued by poverty and marginalization.

Climate change is not just an issue of the environment. It is an issue of social justice. The crisis of climate change indicts primarily the rich and industrialized countries because of their historical disproportionate dependence on fossil fuels and massive plunder of resources especially in less developed countries.  The wealthy have engorged themselves on the fruits of creation. Their greed for resources and rapacious consumption have overwhelmingly contributed to climate change. In the end, the poor were left most vulnerable and forced to pay the price through the destruction of their lives, livelihoods and communities. In the Philippine context, people’s vulnerability is heightened by massive poverty, landlessness, the denial of access to basic services and slim opportunities for gainful employment. These injustices are the same root causes that give rhyme and reason to the long-standing armed conflict in the country, making the quest for resilience a quest for just peace as well..

In our collective reflection, we came to realize that humanitarian aid must address the roots of people’s vulnerability to disasters and should be linked to sustainable development. Holistic development must center on people’s empowerment, their collective rights, and on developing their capacity to decide for themselves the future they wish, including a sound environment and access to those means by which their survival may be secured. As churches, we believe that every person is created in the image of God (Genesis 1:27) and that God desires that all people, especially the most marginalized, experience abundant life. We are disturbed that during the aftermath of Yolanda, we witnessed humanitarian aid used to silence the people, stifle their own actions and undermine their struggle for abundant life.

Our common experiences have inspired us to uphold the following:

We thus commit ourselves to continue down this road of peace and justice, arms linked with the frontline communities confronting the growing crisis of global warming and climate change.