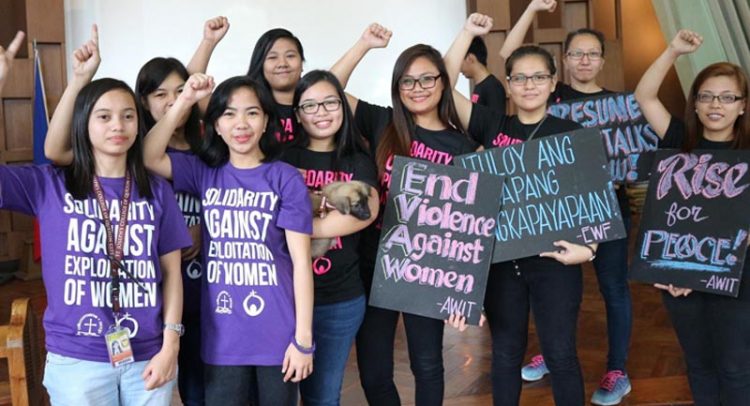 WE are mothers, wives, grandmothers, religious, women pastors and priests, deaconesses, lay women, youth and adults who join the Filipino people in search for just and lasting peace. Bonded by our faith, we renew our commitment to LOVE our neighbours by seeking and pursuing peace based on justice.

On the occasion of One Billion Rising (OBR), the ecumenical women join the throng of women around the world in rising up in solidarity against exploitation. We break and disrupt the norm of silence amidst glaring violence of injustice, exploitation and oppression. They are the customary mold of systems and structures in our society that gave rise to poverty, feudal bondage, landlessness, human trafficking, privatization of health care and education that leave poor ones in the margins – neglected and excluded. The women in the margins are the ones most affected with the poverty. While the Philippines was ranked 5th out of 136 countries in terms of gender equality in economics, health, politics, and education in 2013, Filipino women are still victims of discrimination.

There is no peace when there is poverty, exploitation, oppression and discrimination.

There is no peace when the roots of armed conflict are not addressed. In prayerful reflection and deep analysis, we see that there is unpeace because of massive and dismal poverty, sinful distribution of wealth and control over the resources needed for livelihood, widespread injustice, and corruption in the bureaucracy.

These are the very conditions that make the illegal drug trade proliferate in the communities and make the poor ones victims of both trades and the “policy “ of “Tokhang,” the program of neutralizing by killing drug-addicted people, small-time peddlers, and even the non-users who were simply suspected of being drug users and peddlers. This ineffective campaign took the lives of innocent people specially children who were considered as “collateral” damage. The poor became easy targets and victims of corruption and abuses by those who are in position of authority, especially by those who are armed.

There is no peace when women, and the workers and advocates of justice and peace are imprisoned. There are more than 400 persons languishing in jail simply because they exercise their democratic, civil, and political rights. Among those in detention are 130 sickly and ill, 33 are women, 33 elderly and 49 who have already been detained for 10 or more years.

But, we are hopeful that just and lasting peace is possible no matter how arduous the road is to its fulfillment. We, the women of faith, believers of Justice and Peace,, will always support the Peace Talks between the Government of the Republic of the Philippines and the National Democratic Front for the welfare and greater good of every Filipino, specially the young and the future generation.

We believe in the validity of the agenda of peace talks in addressing the roots of the armed conflict. We trust in the agenda of respect for human rights and international humanitarian laws, social and-economic reforms, patriotic and people-oriented constitutional reforms, and the cessation of hostilities.

We will not give up our HOPE for Just and Lasting Peace until it is fulfilled!

We rise for Just and Lasting Peace

We disrupt the ways that would fetter our dream for a Just and Lasting Peace!

We connect with all women for Just and Lasting Peace!##

Restoring the death penalty is missing the point