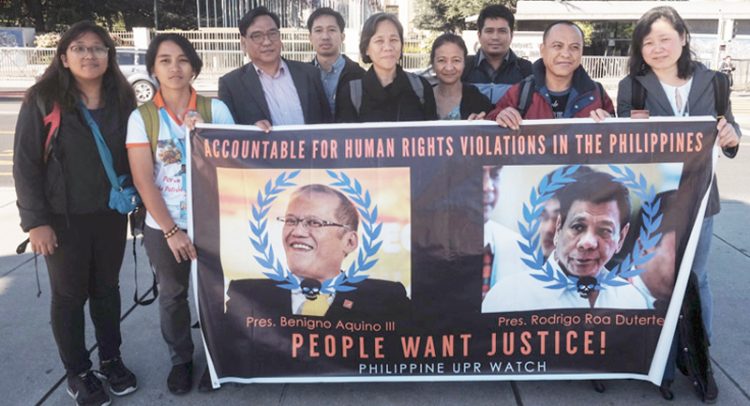 GENEVA – Rise Up, a network of church-based and sectoral organizations, together with the Philippine UPR Watch delegation, has urged UN Special Rapporteur on extrajudicial, summary or arbitrary executions Agnes Callamard to investigate several cases of drug-related extra-judicial killings in the Philippines.

In a conference in Geneva for the May 8 3rd Cycle of the Universal Periodic Review of Human Rights of the Philippines, the Philippine UPR Watch delegation has prepared documents on five cases of killings involving 13 victims in Metro Manila alone. They intend to submit the documents to the office of the UN Special Rapporteur on extrajudicial, summary or arbitrary executions during the UPR.

“Majority of the victims of drug-related killings are urban poor,” said Bro. Ciriaco Santiago, CsSR, convenor of Rise Up, and a photojournalist who covers the spate of drug-related killings in Manila. Santiago added that the blatant disregard by police operatives for the right to due process in apprehending suspects render the entire community vulnerable, often resulting in what the government calls as “collateral damage” when in fact they are victims of police abuse.”

Rise Up likewise aired the call to stop the killings and for government to solve the drug problem through rehabilitation, concentration of police efforts on big-time drug dealers and implementation of genuine socio-economic reforms. ###