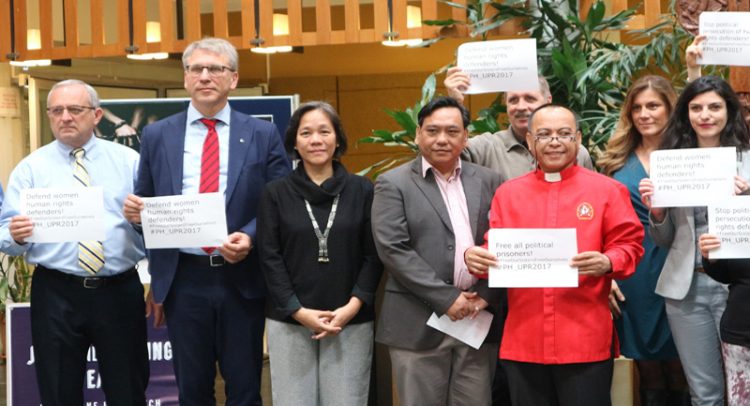 “Sisters and brothers from the Philippines, we are following your work and we are supporting you in raising one voice for justice. Therefore, one voice for peace.”

This was the gist of a statement made by the World Council of Churches General Secretary Rev. Dr. Olav Fykes Tveit in his opening remarks during the formal opening of the photo exhibit sponsored by the UPR Watch Philippines on May 5, 2017 at the World Council of Churches (WCC) Ecumenical Center in Geneva, Switzerland. Dr. Tveit called for one minute of silence to remember the numerous victims of extrajudicial killings and political prisoners still languishing in various detention centers in the country.

“We stand for those who oppressed. We search for the truth. We let the truth speak to us and we share it to the world,” Tveit said, referring to victims of extra-judicial killings and political prisoners still languishing in different Philippine jails.

WCC is the broadest and among the most inclusive international ecumenical organization which counts among its members 345 protestant churches, institutions and church fellowship with an ECOSOC status with the United Nations.

The photo exhibit organized by the Philippine UPR Watch is part of a series of events organized by the Philippine UPR Watch in time for the 3rd Cycle of the Universal Periodic Review of the Philippines. The exhibit showcases various photographs by top Filipino photojournalists that graphically depicts cases of human rights violations under both the present and past administrations. It focused on the brutality of the anti-drug campaign being waged by the Duterte Government. The exhibit also portrays the plight of political prisoners and other forms of human rights violations perpetrated against the indigenous peoples and national minorities.

“It is of utmost concern for us that despite the UPR, human rights violations still occur in the Philippines, and is in fact worsening. What is even worst is the fact that both the Aquino and the Duterte Administrations are dismissive of the accusations that human rights violations were, and are being committed under their watch,” said Atty. Ephraim B. Cortez, secretary general, National Union of Peoples Lawyers Secretary General who gave an overview on the objectives of the photo exhibit.

Sharon Cabusao Silva of Gabriela, a political prisoner under the Aquino government and spokesperson for the Free our Sisters, Free Ourselves campaign gave an account on the plight of women political prisoners currently languishing in different jails in the Philippines. “They are accused of trumped-up charges and are being tried even as there is no evidence linking them to the crime.” Cabusao-Silva cited the case of Miradel Torres who was falsely accused of murder. “In a hearing, PAO Chief Persida Acosta, who defends Torres in the case, was able to make the sole prosecution witness admit that his entire testimony was based merely on a military intelligence report listing the names of all activists in the area where the supposed ambush of military men by the New People’s Army took place. Torres was four months pregnant at that time, and had taken time off from her organizing work for GABRIELA Southern Luzon when the supposed ambush took place.” Inspite of this, Cabusao-Silva said, “Miradel’s trial continues and she has now been incarcerated for almost four years while her two young sons grow up in poverty.” ###