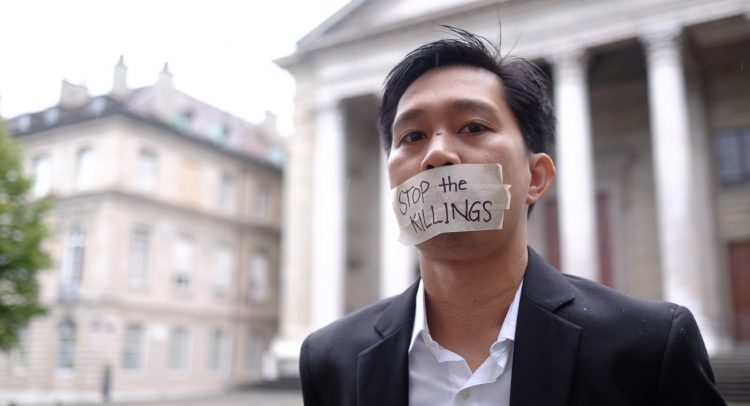 Philippine UPR Watch assails Government report at UN: “Misleading and does not reflect realities on the ground.”

This was the gist of a statement issued by the Philippine UPR Watch in reaction to a report submitted by the Duterte administration for the third cycle of the United Nations’ Universal Periodic Review of Human Rights in the Philippines scheduled for May 8 in Geneva.

The report glosses over the numerous extra-judicial killings happening in various parts of the country. Both the Duterte government’s anti-illegal drug campaign and counter-insurgency programs Oplan Bayanihan under the Aquino regime and Oplan Kapayapaan under President Duterte that targets activists, human rights defenders and community leaders opposing land grabbing and anti-poor government policies have resulted in the killings, disappearances, torture, illegal arrests, among other forms of human rights abuses of thousands of individuals.

For the period under review, Philippine UPR Watch, citing data from its member organization KARAPATAN, said that there were 249 victims of extra-judicial killings, 244 victims of torture, 17 victims of enforced disappearances and 103,337 victims of forced evacuations due to military operations. “Majority of the victims are peasants, indigenous peoples opposing land grabbing and destructive operations of big mining corporations, workers fighting for their right to free association and collective bargaining, children and minors, activists and human rights defenders,” the watchdog said.

Philippine UPR Watch also criticized the government’s Ten Point Socio-economic Agenda as empty talk. “Couched in jargon that means nothing for the poor, it is but a rehash of previous governments’ adherence to neoliberal policies that emphasize privatization, deregulation and liberalization at the expense of the people’s welfare and that of our nation’s interests. “Instead of implementing a program of genuine agrarian reform and national industrialization, the past and current governments of Aquino and Duterte see the issue as a mere question of poverty alleviation, thus emphasizing dole out programs like the Conditional Cash Transfer and micro finance that barely make a dent on the scale of poverty in the country.”

Contrary to the report’s assertions, labor contractualization, along with meager wages, remains a primary issue of labor. This is even worsened by the introduction of the two-tier wage system that has the general effect of further pulling down the already meagre and regionalized wage levels.

The report likewise misleads the general public and the international community that its development plans are “gender-sensitive”. While claiming successes in the adoption of the Magna Carta on Women, there is no way to measure implementation of this law as no mechanisms exist for monitoring implementation, particularly regarding the issue of women’s rights at the workplace. As long as the general political and economic policies remain detrimental to our national interests, there can never be any real improvements in women’s lives.

Moreover, the report also misleads the public by stating that it has already released compensation for the initial 4,000 Martial law victims in March this year when in fact, it has yet to release the partial list of 311 claimants residing in Metro Manila whose applications were approved with finality only on May 8 this year. ###