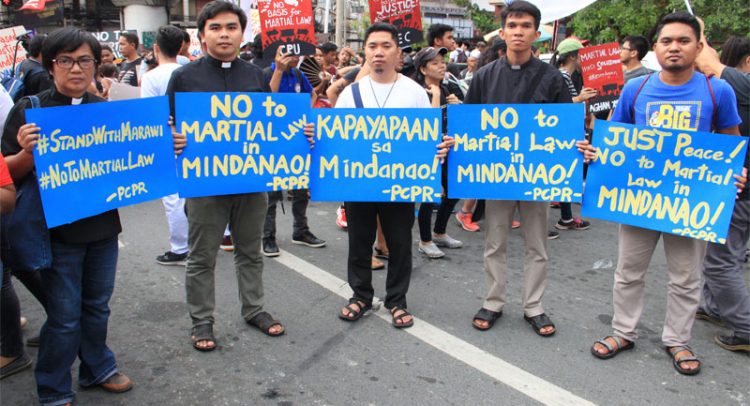 Statement of Obispo Maximo Ephraim S. Fajutagana on the Crisis in Marawi and Imposition of Martial Law in Mindanao

“In righteousness you will be established. Tyranny will be far from you; you will have nothing to fear. Terror will be far removed; it will not come near you.” (Isaiah 54:14)

The Iglesia Filipina Independiente expresses concerns over the brewing humanitarian crisis in Marawi as the Armed Forces of the Philippines (AFP) continues to intensify its operations against armed elements of the so-called Maute group, the proclamation of martial law in Mindanao, and the subsequent suspension of the privilege of the writ of habeas corpus.

We strongly oppose the declaration of Martial Law in Mindanao and its possible imposition to the entire country. We remember with deep chagrin the horrors of Martial Law under the strongman rule of Ferdinand Marcos.

We express alarm over the deliberate attempts of the military to directly associate the Maute and Abu Sayaf with the legitimate sectors of the Bangsamoro people who are fighting for self-determination.

We denounce this scheme, which may erode the legitimate gains of the peace process between the Philippine government and the Moro people. Discrediting the Bangsamoro aspiration for self-determination by creating an anti-Muslim hysteria and contextualizing it as terrorism contradicts the country’s interest for peace and reconciliation.

The IFI also fear the retrogressive effects that the possible imposition of martial law to the entire country may bring to the peace talks between the Philippine government and the National Democratic Front of the Philippines (NDFP). With the forthcoming Fifth Round of peace talks, martial law will only wither the chances of forging an agreement on social and economic reforms.

The IFI also decries the suffering that the armed conflict bring to civilians who are now fleeing from violence with hardly any government assistance. They are vulnerable not only to being trapped in gunfights and airstrikes but also to hunger and communicable diseases due to the displacement from their homes and livelihoods.

Equally, we express concern over the people’s vulnerability to warrantless arrests and filing of false charges as in cases of many Moro people who were unjustly arrested and incarcerated during the Zamboanga seige in 2013. We will be vigilant to any form of excesses and abuses against the people.

We strongly exhort President Rodrigo Duterte to lift Martial Law as it does not offer any answer to the unpeace in our land and is a far cry from what the government perceives to be an act of terror. It will only breed more human rights violations and escalate military violence.

In Christ our peace,
The Most Revd Ephraim S. Fajuatagana
Obispo Maximo
Feast of the Ascension of our Lord
25th May 2017