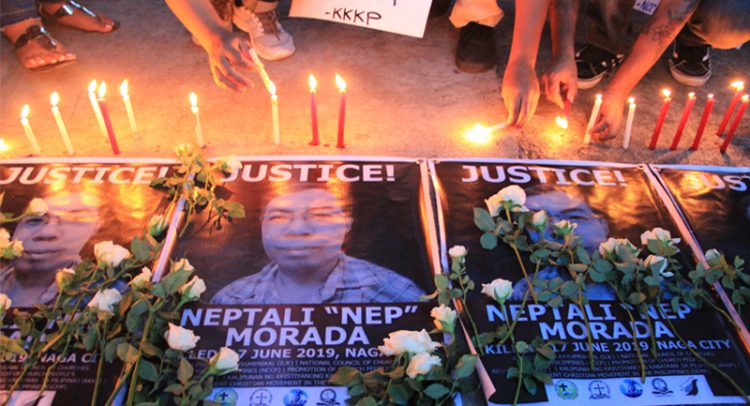 The National Council of Churches in the Philippines (NCCP) condemns in the strongest possible terms the killing of Neptali “Nep” Morada. Nep was gunned down in the morning of June 17, as armed men on board  a white pick-up truck shot him in Brgy. San Isidro, Cararayan, Naga City, on his way to work.

Prior to his murder, fabricated charges were filed against him. He was also subjected to surveillance and had experienced vilification and harassment for his advocacies on peoples’ issues as a former campaign coordinator of BAYAN-Bicol and former regional coordinator of Bayan Muna. Nep, as we know him, was an active ecumenical leader in his younger years. He was a former chairperson of the Kalipunan ng Kristiyanong Kabataan sa Pilipinas, and a senior friend of the Student Christian Movement in the Philippines. Nep, a brother of two former NCCP staff members and to two pastors of the Iglesia Unida Ekyumenikal, makes his death too close to home. He frequented the NCCP grounds in the 1990’s as an ecumenical youth leader, and was part of the many programs of the council. Nep was raised in the ecumenical family, he is one of our own, who exemplified his life in serving Christ by serving the people, especially the least of the least.

We believe that Nep’s death was not an isolated case. Just two days before this incident, two human rights defenders, staff members of KARAPATAN-Bicol, Ryan Hubilla and Nely Bagasala were also brutally killed. They were shot in broad daylight in Sorsogon while aboard a tricycle. We lament this killing of human rights defenders.

We welcome the joint statement released by the 11 United Nations Special Rapporteur last June 7, 2019, calling on the UN Human Rights Council to launch an independent inquiry into the “staggering” and unlawful killings against human rights defenders in the Philippines perpetuated by state agents. The National Council of Churches in the Philippines reiterates its strong condemnation of the brutal murders of Nep and the other human rights defenders. Such work to protect human dignity and uphold human rights should not be met with brutal force. Poverty and social inequalities are the ones which should be eliminated and not those who show genuine compassion for the vulnerable and downtrodden.

We call on to the faith community to exercise our prophetic role and remember what God has told us, “Learn to do good. Seek justice. Help the oppressed. Defend the cause of orphans. Fight for the rights of widows.” Isaiah 1:17

We appeal to the faithful to pray and seek justice for our slain human rights defenders. Let us continue to raise our voices: to STOP THE KILLINGS, and an END to IMPUNITY! Justice for Nep Morada and all victims of extrajudicial killings!

NCCP statement on the killing of Neptali Morada