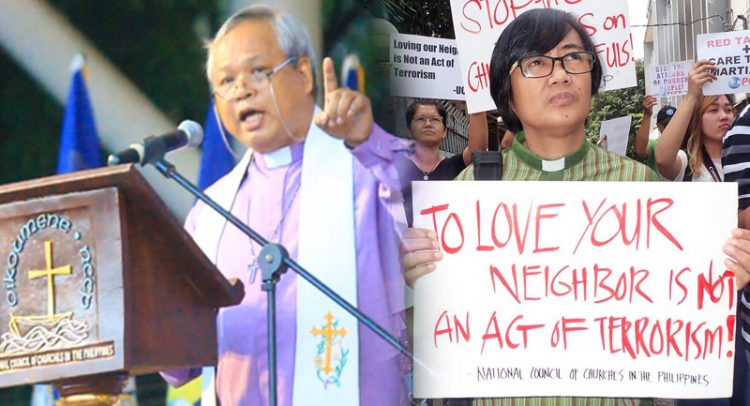 We are hard pressed on every side, but not crushed; perplexed, but not in despair; persecuted, but not abandoned; struck down, but not destroyed. -2 Corinthians 4:8-9, NIV

The National Council of Churches in the Philippines (NCCP) decries the red-tagging of our General Secretary, Bishop Reuel Norman O. Marigza, and a member of our secretariat, Rev. Irma Balaba. The baseless and reckless accusations are dangerous and violate people’s rights, especially in the time of a pandemic. Vilification and red-tagging violate human dignity that is bestowed by God, regardless of their beliefs and position on critical issues.

Rev. Balaba’s picture was posted on the Facebook page of the Southern Luzon Command of the Armed Forces of the Philippines (AFP), with the post attributed to Lt. Gen. Antonio Parlade, Jr. The said post, featuring Rev. Irma’s photo, was used without consent and was posted twice on July 24 with hundreds of shares. The said post implies that Rev. Irma is a surrendered member of the Communist Party of the Philippines – New People’s Army (CPP-NPA). Photos of Bp. Marigza was also posted twice, without his knowledge and consent, by Facebook troll page “Timek ti Cagayan”. The posts maliciously implicate Bp. Marigza as “communist” for speaking up against the Anti-Terrorism Law.

The NCCP as a Council has been red-tagged twice under President Duterte’s administration. The first time was last year on November 5, where the NCCP was included on the list of “front organizations of local communist terrorist groups” by the Department of National Defense (DND). The red-tagging was revived again on May 29 of this year on a Facebook post by the National Task Force to End Local Communist Armed Conflict (NTFELCAC). The NCCP – along with its member churches, the Iglesia Filipina Independiente (IFI) and the United Church of Christ in the Philippines (UCCP), with one of its associate member, the Student Christian Movement of the Philippines (SCMP) – was branded as an open sectoral organization of the communist rebel group in the country, even before the passing of the Anti-Terrorism Act of 2020.

The NCCP vehemently condemns the red-tagging of Rev. Irma Balaba and our General Secretary, Bishop Reuel Norman Marigza. These malicious labelling of our leader and of our staff endangers their lives. We also condemn the red tagging of the NCCP, IFI, UCCP and the SCMP. This is a clear and present danger to the other staff of NCCP, and to the members of the Council as campaigns like these seek to delegitimize and malign the ministry and work of the Council that has always been serving the Filipino people for decades.

We remain steadfast to the vision and mission of Jesus Christ of loving and serving the least of our sisters and brothers. As people of faith, we believe that there must be a greater unity towards healing and even greater cooperation towards providing for the needs of the last, the least and the lost. Reckless and malicious labelling should not be a part of a truly democratic society and most certainly not in a time like this. #

Stop the red tagging, concentrate on the healing_PDF Download