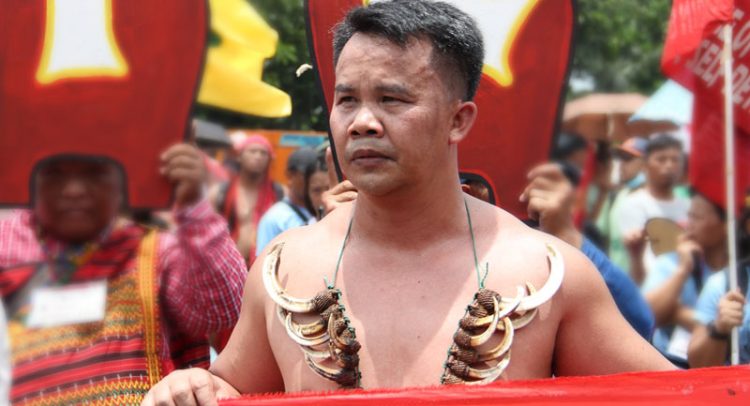 In biblical times the place of dispensing legal justice was the city gate, again and again the prophets of Israel demanded that those who bring charges and pass judgement act in good faith and not pervert justice or persecute the innocent. Increasingly in our nation, the rule of law is manipulated to persecute the poor and to attack those who advocate for them including indigenous people advocating for the preservation of the integrity of God’s creation.

We in the National Council of Churches in the Philippines (NCCP) are deeply distressed by the way in which human rights violations have been committed against indigenous people who defend the environment from development aggression. This injustice is particularly evident in the “tokhang” style extrajudicial killings of nine indigenous people’s leaders and the arbitrary arrest of 17 individuals (including 6 women) who were their colleagues in the Tumanduk nga Mangunguma nga Nagapangapin sa Duta kag Kabuhi (TUMANDUK) which took place in Panay last December 30, 2020. Their community was actively struggling against the Jalaur Mega Dam project. Bishop Gerardo Alminaza of the Roman Catholic Diocese of San Carlos, observed that the massacre of the Tumandok is similar to the massacre of six and the mass arrest of 26 in the towns of Guihulngan, Mabinay, and Sta. Catalina in Negros Oriental in December 2018 as well as the killing of 14 farmers in the island in March 2019. Not only was the “nanlaban” scenario used by the police to justify the killings, the TUMANDUK members were also “red-tagged”.

We are also concerned about the case of Mr, Windel Bolinget, the Chairperson of the Cordillera Peoples Alliance (CPA), who has been falsely accused of killing Gariti Malibato on March 22, 2018 together with nine other people. This incident allegedly happened in Barangay Gupitan, Kapalong, Davao del Norte. These charges are clearly unfounded and have been brought forward as a form of harassment as Mr. Bolinget’s colleagues attests that he has never set foot in that place. This most recent manufactured case against Mr Bolinget is part of a long history of harassment and intimidation including red-tagging, that is being conducted by elements of the Armed Forces of the Philippines (AFP) and Philippine National Police (PNP) against Mr Bolinget and other indigenous activists and human rights defenders.

It is the NCCP’s moral obligation to call for a stop to human rights violations against indigenous people, as they are our co-stewards of God’s creation. We echo the call of the Roman Catholic bishops from Western Visayas led by Archbishops Jose Cardinal Advincula of Capiz and Jose Lazo of Jaro for the unconditional release of the 17 Tumandoks and the impartial investigation of the Tumandok 9 Massacre. We also call for the withdrawal of the manufactured charges that have been brought against Mr. Windell Bolinget and for an end to the harassment and red tagging of indigenous activists. Let us all pray and work for peace and “…let justice roll down like waters, and righteousness like an ever-flowing stream” (Amos 5:24).

Let’s celebrate Christmas amidst the pandemic