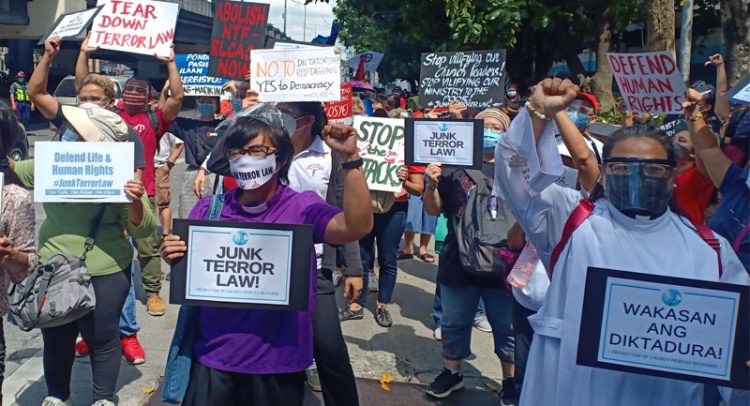 Thirty-five years ago, the Filipino people overthrew a dictator that has ruled ruthlessly for years. That uprising showed the world that a united people, armed only with determination and prayers can stop tanks and soldiers on their tracks and effect a relatively smooth transition of power. EDSA People Power was a shining moment in our history, one that all Filipinos should be proud of. It was a euphoric time when the country was full of hope for a better future. But what has 35 years of EDSA wrought?

Unfortunately, 35 years after EDSA, the Marcoses are back in power, with Bongbong Marcos almost narrowly becoming the country’s Vice President. History is being revised by purveyors of fake news to falsely present that the martial law period was a glorious time for the nation. The military are also more powerful than ever, with a high number of retired generals ubiquitously occupying various civilian posts in government. While there is no outright military rule yet, the Anti-Terrorism Law has been passed which goes against major provisions in the Bill of Rights of our Constitution. The National Task Force to End Local Communist Armed Conflict (NTF-ELCAC) is blatantly red-tagging various personalities and organizations, even churches and schools, that are critical of President Duterte’s administration, violating the rights to freedom of expression and association.

Ominously, extrajudicial killings or “salvagings” which was the popular term during the Marcos period, have become pervasive again. Thousands have been killed in the war on drugs and hundreds of human rights defenders including farmers and indigenous people, have also been murdered, tagged as “communists/NPA supporters”.

Saddest of all, the changes for social justice that was a promise of the EDSA Uprising that will redound to an abundant life for the Filipino people remains elusive. This has become more glaring in this time of pandemic. Millions of Filipinos are suffering the blunt of the government’s failure to properly address the health and economic crises.

So, what has 35 years of EDSA wrought? Hope. Hope that the promise of EDSA can be felt in the younger “woke” generation who are clamoring for change and the older generation who simply would not let the dying of the light during the darkest night. Hope that the people will work together for God’s promise of abundant life like what they did 35 years ago. And as a Council of Churches, we will continue to nurture this God’s gift of hope for justice and peace to rightfully reign in this land through prayers and righteous action. While the light and spirit of People Power seems to flicker at its lowest, let the Bible remind us:

“Do not lag in zeal, be ardent in spirit, serve the Lord. Rejoice in hope, be patient in suffering, persevere in prayer. Contribute to the needs of the saints; extend hospitality to strangers.” (Romans 12: 11-13, NRSV)