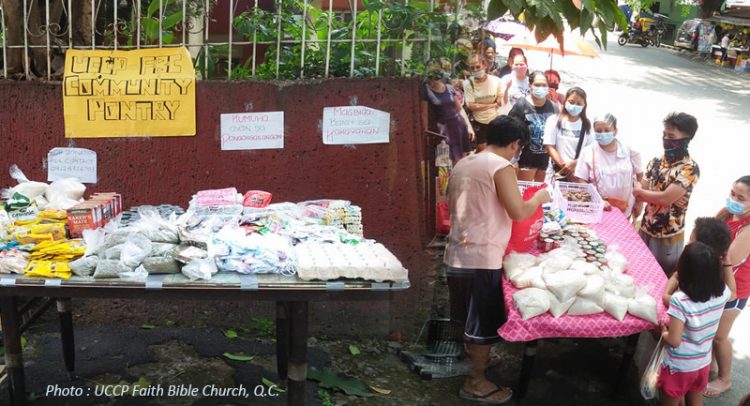 Quezon City: The National Council of Churches in the Philippines (NCCP) praised the community pantries that sprung up in many parts of the country. Bishop Reuel Norman Marigza, NCCP General Secretary said that the community pantries that started in Maginhawa St. in Quezon City are “exemplars of Jesus Christ’s admonition to love our neighbor”. Bishop Marigza further said that “this shows not only Christian values but also that of other faiths as well, for care and compassion to the least of our sisters and brothers”.

“The community pantries should be supported and emulated everywhere. I encourage the member churches of the NCCP to either put community pantries in local churches and parishes or to make donations to existing ones in their communities,” the Protestant Prelate added.

“On the other hand, while the community pantries, show the Filipino people’s propensity for mercy and charity, is also an indictment of the lack or failure of government to adequately support the people in this time of desperation,” Bishop Marigza stated.

The success of the community pantries has unfortunately invited untoward attention. There were already reports of harassment and even the organizers of the initiative in Maginhawa St. were red-tagged by no-less than the National Task Force to End Local Communist Armed Conflict (NTF-ELCAC).

“Regrettably, instead of encouragement by our authorities, the community pantries are unnecessarily vilified and red-tagged. These cases of red-tagging and harassment show why the Bill to criminalize red-tagging proposed by Sen. Franklin Drilon, should be a priority,” the Bishop added.

“It is not a crime to express our love of neighbor by feeding the poor. It is also not a crime to practice our prophetic witness. Despite the fact that the government has billions of resources from people’s taxes, we are still left to look out for each other. As a council, we will continue to support community pantries and stand alongside the majority. It is now, more than ever, that we need to lift up our voice and make concrete actions without fear!” the Bishop concluded. ##

Restore us O Lord, in truth and love

Save God’s Creation, No to the Lifting of Moratorium on Mineral Agreements