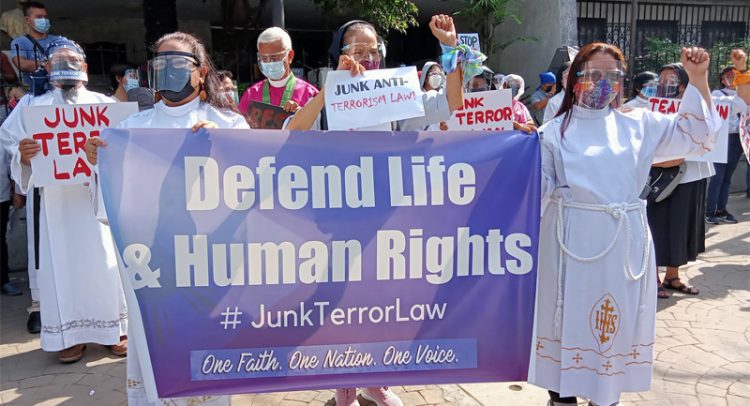 Quezon City, Philippines – One of the largest church groups in the Philippines decried on Tuesday afternoon the high court’s decision to deny all motions for reconsideration “with finality” on the Republic Act No. 11479 or the Anti-Terrorism Act of 2020. National Council of Churches in the Philippines’ General Secretary, Bishop Reuel Norman O. Marigza said, “This is worrisome news not just for civil libertarians but also for the Filipino people.”. Bishop Marigza is among the petitioners who challenged the terror law which poses serious threats on civil liberties.

“This adds to the state’s arsenal of weaponized laws which will be used against its own people.” Bishop Marigza added. With the dismal track record of human rights violations of the present administration and the systematized attacks against civilians, human rights defenders and, the general climate of impunity, the Church group is deeply concerned that the Terror law will be instrumental to the continued attacks against human rights and dignity. Over the past months prior to the Supreme Court’s decision to uphold the Anti-Terrorism Act of 2020, several church people have been subject of human rights violations such as Aldeem Yañez of the NCCP member church Iglesia Filipina Independiente who was arrested on trumped up charges on April 10, Palm Sunday.

Despite being one of the “most challenged” legislations being given a go signal by the Supreme Court, the NCCP expressed “We will remain vigilant and we shall stand not be silent. Our ministry to defend and uphold human rights shall continue despite a step backward towards actually having laws and state policies that will indeed protect human rights.” the NCCP General Secretary ended. ###

UCCP Statement on red-tagging of the church and Rev. Catherine Chang