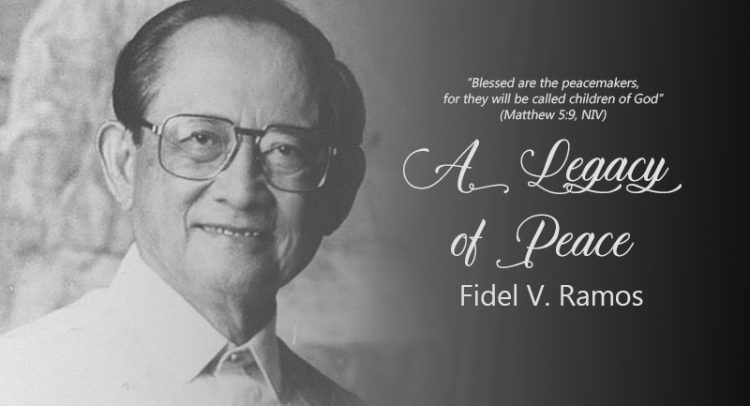 FVR: A Lasting Legacy for Peace

“Blessed are the peacemakers, for they will be called children of God” (Matthew 5:9, NIV)

The National Council of Churches in the Philippines (NCCP), its ten member denominations and associates, join the entire nation in mourning the passing of former President Fidel Valdez Ramos or FVR. We extend our utmost and heartfelt condolences to his bereaved family and we honor his life especially his legacy for peace.

Former President Ramos was a devoted member of the United Church of Christ in the Philippines (UCCP) and was known to be the first and only Protestant elected President of our country. We recall his and his family’s enthusiastic and faithful participation during the annual celebration of the Ecumenical Easter Sunrise Service of the NCCP.

We are forever grateful for his courageous defiance against the former dictator Ferdinand Marcos when he chose the side of the people during the EDSA People Power Uprising of 1986. He never resorted to historical revisionism and stood by the importance and significance of EDSA in the life of our nation.

The NCCP pays tribute to a pillar of peace-building. Even though he was a soldier, it was during his term when The Hague Joint Declaration for the peace process between the Government of the Republic of the Philippines (GRP) and the National Democratic Front of the Philippines (NDFP) was signed. This became the basis and the agenda for the formal peace talks.

FVR also formed the National Unification Commission (NUC), which held provincial, regional and national consultations while peace talks with armed opposition groups were held in abeyance. This resulted in the “six paths to peace” which defines his administration’s approach to the pursuit of peace which include: Pursuit of reforms that deal with the root causes of insurgency and social unrest; Consensus-building and empowerment for peace; Peace talks with rebel groups aimed at final negotiated settlement, with neither dishonor nor surrender for any of the parties; Programs for reconciliation, reintegration into mainstream society and rehabilitation; Protecting civilians and de-escalation of conflict, addressing concerns arising from continuing armed hostilities, e.g. strict implementation of laws and policy guidelines for the protection of human rights; Building and nurturing a climate conducive to peace.

President Ramos may not be entirely faultless, he is but human after all, however, his legacy on peace, particularly to principled negotiations, will remain as an inspiration and a challenge to all. We may lose the man but what he has started is a step forward for the pursuit of genuine and lasting peace. Following his lead, it is now our duty to do our part in creating a just and peaceful future.