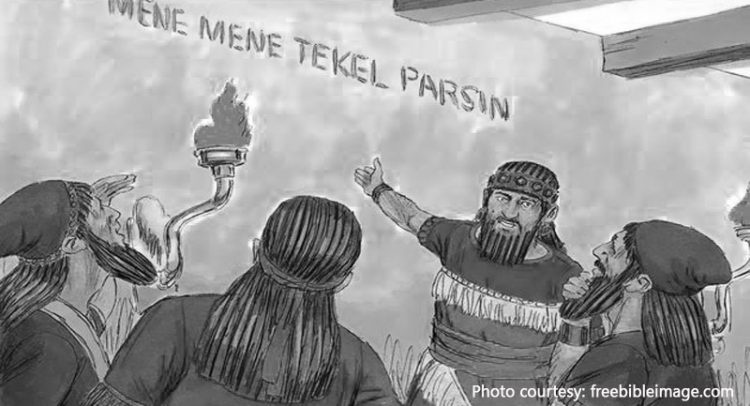 The handwriting on the wall

To the People of God, Greetings:

It behooves us to announce to all and sundry and to restate the theological imperatives, the National Council of Churches in the Philippines (NCCP) believes in. The NCCP “affirms the Sovereign Lordship of God over the life of nations, and of the Philippines in particular, and therefore speaks in the light of the heavenly vision it perceives of human situation in the country:

The NCCP affirms that God has called her to a priestly and prophetic ministries, to speak for the poor and the oppressed and all other disadvantaged or less fortunate people in the Philippines and in the world;

By the nature of the churches’ mission, the NCCP affirms its calling to proclaim God’s Judgment against all appearances of wickedness and unrighteousness in high and low places which stand as obstacles to His will that all may have abundant life.

In the light of these imperatives of Faith, the NCCP sees and reads the“handwriting on the wall”

In the spirit of the original handwriting on the wall (Daniel5: 25 – 28): MENE, MENE. TEKEL, PARSIN; “You have been weighed in the balances and found wanting.”

Two regimes following Ferdinand Marcos’ blatant dictatorship, the ruling elites will have us to believe that on the horizon looms signs of hope for more social justice, more democratic freedom, and a peaceful change in the Philippine society. The seemingly hum and bustle of factories and the frenzied construction of infrastructures in the regional growth centers and industrial enclaves are steering this country toward NIC-hood. But,while we see the:

•displaced millions of peasants toiling for food on the unproductive land;
•thousands of laid off workers in these factories;
•cold and hungry typhoon and lahar victims cramped in foul-smelling and crowded evacuation centers in different areas;

•power-bloated Presidency still seeking more emergency powers to take control of crisis situations;
•a proposal to overhaul the 1987 Constitution, stripping it of key provisions that mandate the protection of human rights and social justice, compelling the citizen to unqualifiedly “defend the State”,“obey the laws” and “cooperate with the duly constituted authorities” which, in the words of Rep. Joker Arroyo, provides the “legal and ideological underpinnings of a police state”;
•the unrevoked National Security Act and the implementation of the National ID System which, in the hands of unscrupulous persons in government can, in fact be a tool for intrusion into the private lives of the citizens;
•the increasing development aggression through the deployment of army battalions in Regional Industrial Center (RIC) areas where“no union, no strikes policy” have been declared, and local opposition to the Medium Term Philippine Development Plan (MTPDP) is expected; and many more.

Now, we are witnesses to current moves by the powers that be to further institutionalize these immoral features through the Anti-Terrorism bills.Longer detention periods without charges, warrantless arrests, freezing of bank accounts, examination of marketable securities, forfeiture of property are among the provisions of the two bills. True, the Ramos administration has “rejected” the Anti-Terrorism bill sponsored by Senator Juan Ponce Enrile, who was one of the Architects of Martial Law during the Marcos years, due to mounting public opposition. But only to replace it with a far harsher bill being proposed by the Department of Justice(DoJ). The DoJ bill consolidates the previous two bills and defines “terrorism” so ambiguously as to include any form of protests and acts that influences the behavior of the people either political, social, cultural,religious, cultists and mere association.

All these moves by the administration point to the direction which should be clear to us by now – the imposition of martial law and authoritarianism without formally declaring it. Let us not be deceived by assurances that the proposed bills in question have enough safeguards. We only remember too well similar promises of the Marcos regime in the past, which went as far as declaring that Martial Law would not be declared.

In 1986, the Filipino people let out a resounding cry against the dictatorship: “Enough is enough”. Their cries jelled into a solidified force that “scattered the proud with all their plans and brought down the mighty kings from their thrones” (Luke 1:51-52).

Nearly ten years later, many people seem to be showing evidences of political “Alzeihmer’s Disease” — a permanent loss of memory. We seem to have forgotten the brutality and heartless repression that defined our social reality under the iron hand of the US-Marcos dictatorship.The key players in that unpopular regime continue to hold sway to this day. The ideology of martial rule has entrenched itself in the echelons of power and has permeated the core of Philippine society.

But relationships of autocratic dominance and control were never in God’s plan for His people, for ours is a God of freedom. Yahweh freed the Israelites from the dictatorial Pharaoh in Egypt. Jesus Christ shattered the bonds that kept people captive to powers and principalities and the Holy Spirit breaks people’s enslavement to fear, fatalism, and false hopes.

More than ever, at this point in time, Christians presently are being challenged to wake up from their deep slumber, to rub the sleep from their eyes and realize that we are being deceived. There is more than meets the eyes.

It is clear that under the Ramos Government, the essence of martial rule has wrapped up its mantle on society. Indeed it came “like a thief in the night”.

So then, we should not be sleeping like the others, we should be awake and sober”(1 Thessalonians 5;6) for the “enemy prowls about like a roaring lion seeking someone to devour” (1 Peter 5:8).

We call therefore on President Ramos who is of the same Faith, to reconsider pursuing the anti-terrorism bill (whatever name he may call it) and consider seriously the Preamble of the Constitution of the Republic of the Philippines which declares that the general welfare of the Filipinos shall be the paramount duty of the State, and not only fora few, AND lest the President forgets that as long as the Philippine society remains under the influence of foreign domination and their capital, the majority of Filipinos shall remain landless, powerless,marginalized and poor, and graft and corruption shall continue to plague the government.

Let us reaffirm our vision of a friendlier tomorrow when there will be no more tears… no more pain… no more suffering – when the former things will pass away and the fundamentally new and better will emerge.

“Let none deceive you with empty words, for it is because of these things that the wrath of God comes upon the sons of disobedience.Therefore do not associate with them, for once you were darkness, but now you are light in the Lord; walk as children of light (for the fruit of light is found in all that is good and right and true) and try to learn what is pleasing to the Lord.”

Statement of opposition to the legalization of gambling