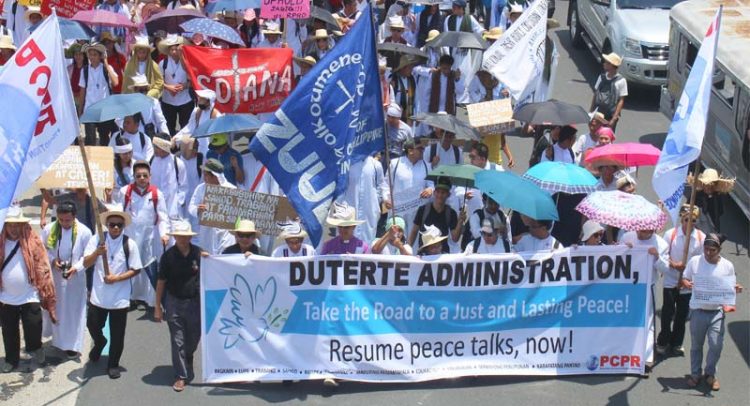 “God will never forget the needy; the hope of the afflicted will never perish.”
Psalm 9:18

The National Council of Churches in the Philippines appreciates the many initiatives of President Rodrigo Duterte that are directed at addressing the urgent needs of our nation. We affirm the openness of the President to diverse groups within our society, especially those who represent the voices of the basic sectors, by including them in his Cabinet and other government agencies. We appreciate the openness of the President to engage in principled peace negotiations with the NDF and also with armed groups in Mindanao. We pray that this commitment and openness will be maintained and that the basic issues of injustice in our country which have resulted in decades of unpeace will be addressed. We also call on the President to honor his commitment to release political prisoners as a fundamental confidence building measure to ensure that the peace talks can proceed in an atmosphere
of mutual trust.

We affirm the commitment of the President to bring integrity and honesty to public service. His recent signing of an executive order on freedom of information (FOI) is a good sign of a well-meaning intention to ensure greater transparency in government. Given its many limitations as an executive order, we remain hopeful that a more comprehensive FOI can be put into legislation.

We call on the President to ensure that there are effective measures taken to dismantle and limit the power of political dynasties, it is high time that an enabling law be passed to give flesh to this constitutional mandate. We support his commitments to address the issues of the urban poor, and call on him to strongly maintain his position that demolition of informal settler communities should not proceed without adequate relocation.

We call on the President to maintain his resolve to defend our national patrimony and sovereignty. We affirm the ongoing scrutiny on the mining companies in our country and their deleterious effects on our natural resources, environment and rural communities, particularly indigenous communities. We call on the President to defend our sovereignty against the militaristic prowess of superpowers, to defend and preserve Filipino interests, and to ensure that we do not become simply a pawn in the game of these great powers.

We call on the President to ensure that there is demilitarization of our rural communities, that armed militia are dismantled, and that members of the Philippine Armed Forces strictly respect the rights and dignity of our people.

As churches engaged in works of compassion, we have also witnessed the destructive effects of drugs on individuals and society and the corrupting effects of drug money in our political system. We support the President’s commitment to address this problem. However, we call on the President to ensure that in the course of curbing this problem legal processes are respected and human rights are protected; that those who are drug dependents are treated with compassion and provided with opportunities to seek treatment; and that those who derive profit from this trade are made accountable. We plead with the President to refrain from reintroducing death penalty which we consider a fundamental denial of a basic human right, an affront to the living God who has created every person in God’s own image, and an ineffective measure to deter crimes. We observe that even in countries with more robust legal systems than our own, people who are innocent, especially those who are poor and without the means of legal protection, have been subject to the death penalty; how much more likely in our own country?

President Duterte was catapulted to the highest office in the country with significant support from diverse sectors of our society; he currently enjoys unprecedented levels of public trust, and has reintroduced hope in our national life. We call on the President to honor the trust that the Filipino people have given him and to make real the promises of change that he pronounced.

We assure the President of our ongoing prayers and support, and we will continue to exercise our prophetic calling as churches to defend the interests of the poor and vulnerable and ensure that their voices are heard. “God will never forget the needy; the hope of the afflicted will never perish.” Psalm 9:18