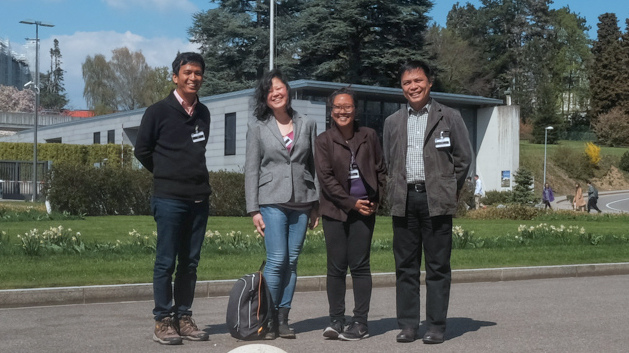 Geneva, Switzerland – An ecumenical delegation of Philippine human rights organizations and advocates yesterday brought to the attention of the Office of the United Nations Special Rapporteur on Extrajudicial Killings the continuing human rights violations in the Philippines, especially the killings related to the war on drugs and the counter-insurgency programs.

The Philippine UPR Watch, a network of faith-based and human rights organizations that engages in the Universal Periodic Review (UPR) process of the UN Human Rights Council (HRC), participated and presented in the Pre-Session on the UPR organized in Geneva, Switzerland, by international rights group UPR.Info, a month before the rights review on the Philippines.

Br. Ciriaco Santiago, CSsR, of the Redemptorists and RISE UP, a member of the delegation, informed the office of Dr. Agnes Callamard, the UN Special Rapporteur on Extra-Judicial, Summary or Arbitrary Executions, on his experience in documenting the spate of drug-related killings in Metro Manila. “Every night, our group of local and sometimes foreign journalists/media practitioners goes to poor areas in the city to take photos of the carnage that is taking place. We have documented many of the thousands that were killed without due process, mostly from urban poor communities,”Santiago stated.

“These killings were mostly the result of botched police operations or done by unidentified assailants.  The impact of the killings is mind-numbing and heart-wrenching since the victims have left behind many orphaned children and young and jobless widows,” added Santiago.

Fr. Jonash Joyohoy of the Ramento Project for Rights Defenders of the Iglesia Filipina Independiente (RPRD-IFI), stated that“there are no specific actions on the part of government to actively protect the rights of human rights defenders. They continue to be subjected to threat and intimidation, surveillance, trumped up charges, red-tagging, enforced disappearances, and to extra-judicial killing, in line with continuing counter-insurgency programs of the State party.”

Prior to the meeting, Joyohoy and Ms. Johanna May Dela Cruz of the National Council of Churches in the Philippines (NCCP) gave a presentation on violations of economic, social and cultural rights, workers’ rights and the culture of impunity respectively, during the UPR.Info Pre-Session. Dela Cruz, in her presentation, stated that, “the killings of Lumad leaders and farmers and the displacement of their communities by the military and the paramilitary groups under the Aquino government up to the spate of killings in the Anti-Drug Campaign of the current President, Rodrigo Duterte display the brazenness of how human rights violations are being carried out in the Philippines and the climate of impunity that persists.”

“These killings and other human rights violations and the failure to apprehend and prosecute the perpetrators during the administrations of the Presidents Arroyo and Aquino have greatly contributed to the worsening climate of impunity in the country. This culture of impunity is a major factor for continued violations of human rights in the country under the present government of President Duterte,”Dela Cruz added.

The UPR Pre-Session was attended by many representatives of permanent missions of UNHRC member states who have expressed concern on the worsening human rights situation in the country.

Part of the delegation is Dr. Angie Gonzales from the International Coalition for Human Rights in the Philippines (ICHRP), based in the Netherlands.

The delegation will conduct meetings with foreign missions, international organizations and other UN special procedures. This is in preparation for the third cycle of UPR on the Philippines this May 8, 2017. The UPR is a process whereby the human rights record of a country will be examined by other member states. The period under review was for the last four years of the Aquino administration and the first few months of the Duterte government.#

Let them lay their heads under a roof