Normina, with the other three families decided to leave the evacuation center as they were already full and cramped considering it was her due month of pregnancy when they decided to leave Marawi.

Bringing nothing, they travelled on foot of walking and hiking, first to Kapai town 38 kilometers away from Marawi then to Balo-I and then finally  settled in Iligan City.

The almost two months of armed confrontation in Marawi have displaced an estimate of 400,000 individuals scattered mostly in nearby towns and cities particularly in Iligan City. 10 percent of which are in recognized evacuation centers while 90 percent are home based who choose to stay with their relatives.

Though majority, home based IDP’s rarely received help as most relief agencies concentrates only on designated evacuation centers. Home based can be found through village chief coordination followed by house to house interviews.

Fully cramped evacuation centers and lack of water facilities are most common reason why they choose to stay with their relatives aside from the fact that it is easier for them to account and monitor the safety of their family members.

But like the IDP’s on evacuation centers, home based also needs help as their family is caught unprepared for the continuing crisis in Marawi.

“Sometimes we get help but most of the time we don’t, as it was on June 24 when we get our first relief packages” said Normina.

“Though we regularly received food packs and hygiene kits, but for two months we are only consuming sardines and noodles” said Noraysa Arumpak an evacuee at Pantar Elementary School, Iligan City.

Noraysa together with her 9 children were staying in a school room which accommodates four other families. “I wish they would also include some cash so we can buy other things we need for ourselves and for our children” Noraysa added. 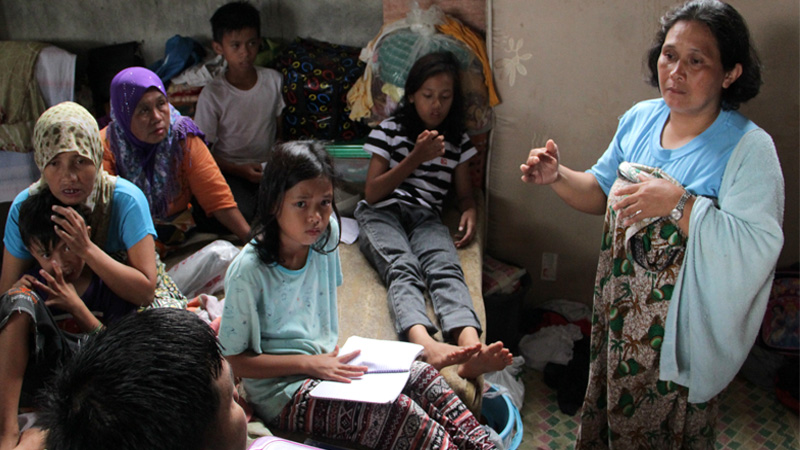 “It has been only at the end of Ramadan since the last time we had a fruit salad.” Noraysa added.

Mostly women, mother and children are in the evacuation centers, while men tries to get back to their homes, others look for work and income in Iligan City.

Mothers were asking diapers for their babies, while common illnesses are fever, cough, colds and diarrhea.

“Though we are already used to the sound of bombings we want this crisis to end very soon. We want to go back home and live like before, a peaceful marawi and peaceful maranao.”  Said Noraysa.

As an ecumenical response to Marawi, the NCCP Operation Paglingap continues its call for support in cash or in kind.

Local friends may provide their support by giving in kind:

Financial assistance may be directed to the:
National Council of Churches in the Philippines
CHINA BANK
Rodriguez Sr. Blvd. Business Center