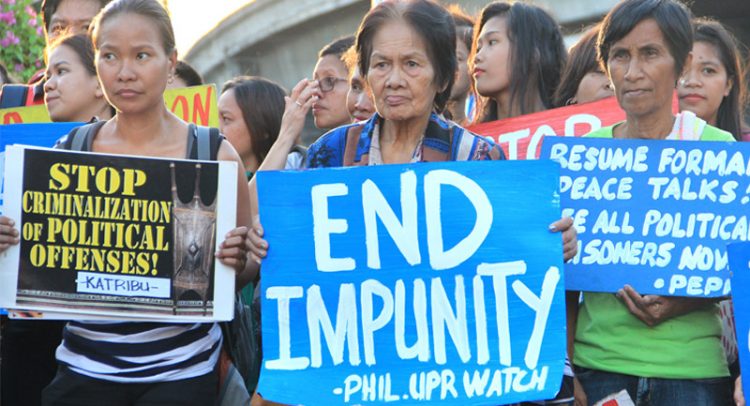 In 2007, the National Council of Churches in the Philippines (NCCP) issued a statement on the Human Security Act, calling it “…a travesty against the sacred tenet of freedom that God bestowed on people.” The NCCP further stated that

“The Human Security Act (HSA) is based on the notion that ‘the State must be held above all else.  The State must wield absolute power, using everything to control the territory and population of a country.’  It must protect itself at all costs even at the cost of its own citizens.  Thus, anything and anyone, that threatens national interests in the eyes of the present dispensation is deemed as a foe, a terrorist, ‘an enemy of the state’.”

“With the HSA, the State has set itself up as the absolute power that determines what course people’s lives will take by putting forward a very vague definition of terrorism.  By so doing, the State has usurped the functions that rightfully belong to God.  By playing God, the State commits the highest form of sacrilege.”

“…to accept the Human Security Act is to defy the will of God. The Human Security Act must be reviewed by our lawmakers in order for the law to really safeguard the security of human beings. But because HSA is contextually infirm and is prone to abuse by repressive government authorities, the [NCCP] calls for the repeal of RA 9372.”

At the time, the HSA was criticized in that it will surely result in many human rights violations because its provisions curtail basic freedoms that run counter to our Constitution. Martin Scheinin, the first UN Special Rapporteur on the Promotion and Protection of Human Rights and Fundamental Freedoms while Countering Terrorism, raised serious concerns that “an overly broad definition” of terrorism in the Act is at variance with the principle of legality and thus incompatible with Article 15 of the International Covenant on Civil and Political Rights.

The Act is now being amended into the “Prevention of Terrorism Act.” The basic question as regards the amendments is that does it take into account observations in the HSA that it compromises the safeguards assured by the Bill of Rights of the Constitution and the International Covenant on Civil and Political Rights? The deletion of the phrase “In the implementation of the policy stated above, the State shall uphold the basic rights and fundamental liberties of the people as enshrined in the Constitution” and the preceding paragraphs in Section 2 is already a cause for alarm.

The proposed Prevention of Terrorism Act has defined terrorism in so many terms, and the definitions seem to widen the net to catch so-called “terrorists;” such provisions can be abused by state authorities. Section 3 – Definition of Terms has actually made the old Human Security Act tame by comparison given that it is open to interpretation by state agents.

(F)          PROBABLE CAUSE REFERS TO A REASONABLE GROUND OF SUSPICION, SUPPORTED BY CIRCUMSTANCES SUFFICIENTLY STRONG IN THEMSELVES AS TO WARRANT A REASONABLE MAN IN BELIEVING THAT THE INDIVIDUAL, ORGANIZATION, ASSOCIATION OR GROUP OF PERSONS WERE OR CONTINUOUSLY ENGAGED IN TERRORISM OR HAVE PERFORMED ACTS COMMITTED BY A TERRORIST OR TERRORIST ORGANIZATION AS DEFINED IN THIS ACT;

This section, when carried out, will have an adverse effect on people’s freedom of association and expression. It also basically presumes guilt unless proven innocent. Only recently, the names of individual activists and human rights defenders were included in the list of supposed leaders and members of the Communist Party of the Philippines and the New People’s Army in a Department of Justice petition that proscribes the two entities as terrorist organizations. The list includes personalities such as UN Special Rapporteur on the Rights of Indigenous People Vicky Tauli-Corpuz and other human rights defenders.

The proposed Act will normalize practices like the above. The state can use this Act to further persecute its perceived enemies, and there lies the danger. Moreover, all phrases stating “police or law enforcement official” were replaced by “law enforcement or military personnel,” further broadening those who can wield the Act. The NCCP and its member churches have been accused by the military in the past as “enemies of the state” because of our uncompromising stance on human rights. The proposed Act will make it difficult for individuals and organizations like the NCCP to fulfill its prophetic mission for the poor and marginalized.

The provisions on safeguards and checks and balances in the HSA were also either watered down or deleted in the proposed Act.

The NCCP registers its opposition to the proposed Prevention of Terrorism Act because it is an amendment of what we believe to be a fundamentally flawed law in the first place. This proposed Act is actually much worse.

*Read during  the Technical Working Group meeting of the Committee on Public Order and Safety and the Committee on National Defense and Security on the Draft Substitute Bill to House Bills Numbered 7141 and 5507 entitled: AN ACT AMENDING REPUBLIC ACT NO. 9372 ENTITLED “AN ACT TO SECURE THE STATE AND PROTECT OUR PEOPLE FROM TERRORISM”, OTHERWISE KNOWN AS THE “HUMAN SECURITY ACT OF 2007”

Donwload PDF: On the proposed prevention of terrorism act