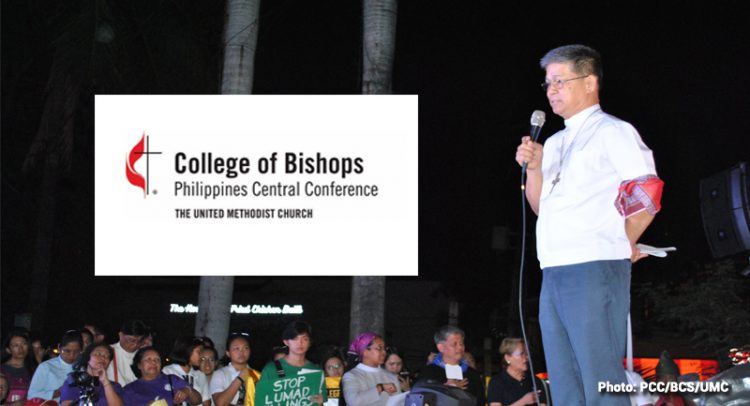 We too announce and pronounce – UMC

SOLIDARITY STATEMENT: ONE FAITH. ONE NATION. ONE VOICE

“The people that is sitting out their lives in darkness saw a great light; and to those sitting in a country and the shadow of death—light arose to them.” (Matthew 4:16 )

As believers and servants of a God who sets people free, we join in solidarity with our people who are dwelling and sitting in darkness, and yet are seeing a bright light. As ONE people living and walking in this LAND covered by the dark shadow of death, with death casting its shadow on us now living in this land—what with the widespread and wanton killings of the poor and the attacks on the defenders of human rights, attacks on labor unions, on lawyers, on teachers, on peasants, on media, and on the religious and clergy—light has dawned. (John 1:1-5)

Light has shone and broke through upon us. We have been called to choose LIFE (Deuteronomy 30:15-29), to defend the rights of the poor and the needy (Proverbs 31:9), to speak the truth to those in power, and to declare the favorable year of the Lord for justice and freedom. This FAITH is both being tested and strengthened in the crucible of social change towards justice and peace as we engage in mission and ministry with the deprived, exploited, oppressed and marginalized in our NATION that continues to wallow in a crisis of truth, chronic poverty, and a culture of impunity. (Isaiah 28:1-8, 17; John 14:6)

And so we deepen our commitment in asserting the truth of God’s promise of abundant life as ONE VOICE. Our faith imbues us with the courage to hope for the future, to speak the truth in love, to do justice, and to build a lasting peace in our nation. Our FAITH moves us to defend human dignity and promote respect for our God-given LIFE, to join, unite and always be in solidarity with the people, so that with ONE VOICE we may proclaim God’s intention of making justice roll down like a never-ending stream (Amos 5:24), and so that lasting peace may be known throughout the land. So that as ONE NATION, we can begin to witness to what is true, honest, just, and good (Philippians 4:8), rebuking those who steal from the public coffers, who kill the poor and their servants.

Although separation of church and state permits the continuation of interaction, nevertheless, the state should not attempt to control the church, even as the church does not have any intention of dominating the state [Church and State Relations, ¶ 164. V. The Political Community, The United Methodist Social Principles]. No government nor administration should use its authority to promote its brand of religious beliefs (including its brand of atheism), or should sneer at and blatantly make a mockery of other faiths by calling other people’s God “stupid”, and by ridiculing other people’s beliefs by denigrating their crucified Lord (I Corinthians 2:2-5; Galatians 2:20) and condoning the killing of His followers and adherents whose only crime is to defend the people’s rights to an abundant life.

So we call on you our beloved brothers and sisters in faith as your leaders to pray without ceasing that this Government be able to promote justice instead of violence and unrighteousness, to prioritize the process of addressing poverty in moving towards lasting peace that may finally lead our people towards experiencing life in its fullest.

The College of Bishops of the Philippines Central Conference, The United Methodist Church
21 January 2019.

Defend the rights of children: No to lowering the minimum age of criminal responsibility