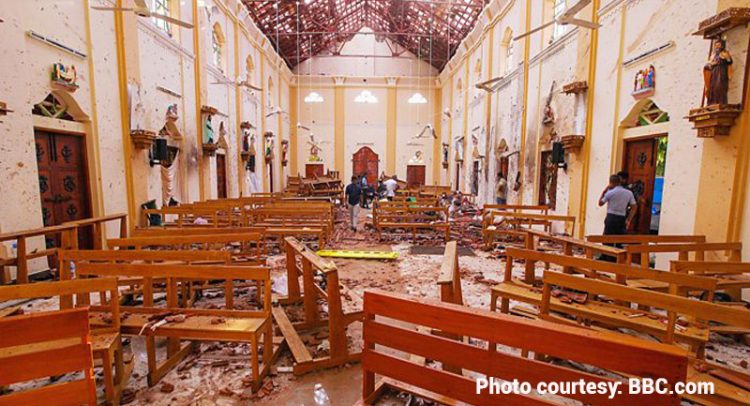 Statement of Solidarity for Sri Lanka

The National Council of Churches in the Philippines mourns and grieves with the people of Sri Lanka, especially to the families and loved ones of those who were affected by the bombings on Easter Sunday in eight (8) different areas in the country.

Among the places that were targeted by the coordinated explosions were three Christian churches during Easter Worship Service – a celebration of the Resurrected Christ.

According to news reports, the death toll rose up to 290 while there were 500 wounded. There were also 36 foreigners among those killed in the blasts.

We view these bombings as abominable acts of terror and utterly repugnant. They are attacks against the sanctity of life. They are acts of cowardice against innocent civilians and such acts are an affront to any faith or any religious group.

Some of the victims of the bombing were Christians. Last month there were also attacks against Muslims in New Zealand. In Pittsburgh, USA last year, the victims in a shooting were Jewish. We call on the churches and the religious community to pray and work in harmony with faith-based communities to end religious bigotry and sectarianism.

We lament and express our condolences to the people of Sri Lanka who suffered in the attacks. In prayer and in the spirit of solidarity, the NCCP will continue to walk side by side with Christian churches and, especially with the National Council of Churches in Sri Lanka and the wider ecumenical community and accompany them in this hour of grief–in the darkest time and worst violence Sri Lanka has experienced since its civil war.

We are one in condemning these atrocious attacks, and call for justice for lives and properties lost in this tragedy.

Christ who rose from the dead continues to remind us to rise up and spread peace, because we are sent in the world just like him. He was wrongfully accused and was killed, but he continues to rise up among the people. Once and again, we are called to steadfastly hold on to the promise of the Risen Christ, fulfilling the message of the resurrection event which abounds in hope, and believe that goodness will always triumph over evil even in this difficult juncture.

As people of faith, in the spirit of love, let us together end violence that harms our people. Let us continue to build bridges and create spaces for solidarity with those who need God the most.

Let us continue to embody the Risen Christ and the message of Peace in these devastating times of unpeace.

Christ is risen! The Lord is risen, indeed!