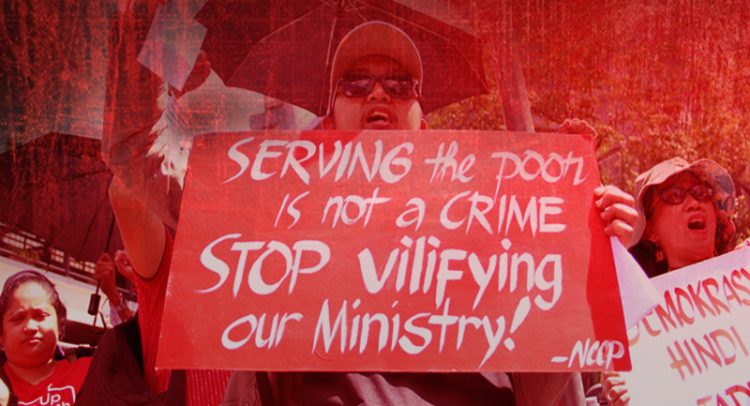 “What kind of government maligns churches in the middle of a pandemic? Instead of espousing unity and working with the people to beat COVID-19, the government spends time and effort naming churches/church organizations and cause-oriented groups as enemies!” NCCP General Secretary Bishop Reuel Norman O. Marigza said in a statement.

“We are enraged by the audacity of the government to maliciously and unfoundedly implicate churches to the CPP-NPA-NDF in a time such as this. The government has already neglected the Filipino people in battling the pandemic and failed to address their rightful economic demands. They have failed us once again by attacking the churches that have been active in providing services to the communities,” the General Secretary said.

This was after the NTF-ELCAC released in its official social media accounts on Facebook and Twitter a series of photos listing alleged “open sectoral organizations, underground mass organizations, and allies established by the CPP-NPA-NDF” on May 30. The said list included NCCP, IFI, and UCCP and the church-related organization – Promotion of Church People’s Response – without any supporting documents or sources.

Bp. Marigza shared that the General Convention of the NCCP has a resolution on red-tagging. He said that “…red tagging short circuits the fundamental process of democratic discourse and violates due process especially as it curtails, among others, the freedom of expression. It is thus unfair to NCCP as it is to all others—persons or civil society organizations—to be in the list. We assert that red-tagging NCCP violates our right to the exercise of the freedom of religion, indeed to the exercise of ministries in furtherance of our religious beliefs. Such freedoms are at the core of the Bill of Rights of the Philippine Constitution.”

Moreover, the claim that the NCCP, IFI and UCCP were established by the CPP-NPA-NDF is preposterous and is chronologically impossible. Founded in 1963, with roots dating from the Protestant missionaries during the turn of the 20thcentury, the NCCP is the largest ecumenical fellowship of mainline Protestant and non-Roman Catholic churches, united in faith in Jesus Christ and faithful in the mission of accompanying the Filipino people towards the Biblical vision of a life in all its fullness as stated in John 10:10. The IFI and UCCP, which also have roots dating from the early 1900s are among its ten member churches.

“It is not a coincidence that the NTF-ELCAC released such malicious list on the same day the Anti-Terrorism Bill was discussed in the Congress. This Bill will trample upon the rights of the Filipinos to participate and be critical in the public square. It could single-handedly kill democracy and completely close the already shrinking civic spaces we have in the country.”

The joint House Committees on Public Order and Safety and on National Defense and Security adopted the Senate version of the bill that would repeal the Human Security Act and approved a similar unnumbered bill. This seeks to ease legal restrictions on law enforcers and gives a broad definition of terrorism.
“In these dark days, we will continue to stand firmly on our Christian faith and mandate to follow the mission of Christ and serve communities in need.” ##

There should be no dead air during a crisis like this...