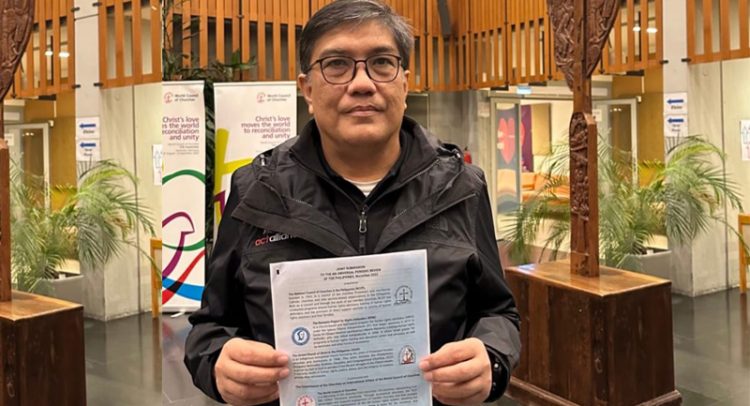 GENEVA, Switzerland – The National Council of Churches of the Philippines (NCCP) scored the Philippine government for failing to end attacks on church people during a side event at the United Nations (UN) headquarters here on Nov. 10.

“Attacks on churches and our leaders and workers have been reported in previous UPRs,” said Mervin Sol Toquero, NCCP program secretary at “Can the UPR address impunity in the Philippines,” a forum sponsored by Franciscans International.

Toquero added: “The failure to get justice and accountability for those violations has contributed to the climate of impunity, which further intensified during the administration of President Rodrigo Duterte and continue under the government of President Ferdinand Marcos Jr.”

UPR refers to the Universal Periodic Review, a process through which UN member states review the human rights records of other member states.

The NCCP is an ecumenical fellowship of non-Roman Catholic denominations in the Philippines. The review of the Philippines, covering January 2017-July 2021, happens on Nov. 14.

Toquero noted a “prevailing pattern” in which church people working among the poor and marginalized have suffered state-sponsored attacks.

The NCCP, members Iglesia Filipina Independiente (IFI) and the United Church of Christ in the Philippines (UCCP), as well as associate member Student Christian Movement of the Philippines, have been labelled as “front organizations of communist terrorist groups,” he said.

The Terrorism Financing Prevention and Suppression Act has been used to stifle the operations of UCCP ministries to indigenous peoples and poor students, and the Rural Missionaries of the Philippines, which serves peasants and farmers.

Individual church leaders have also experienced attacks, he added. Hundreds have been “red-tagged” or baselessly branded as rebels. Some are now in prison for fabricated charges, among them Rev. Nathaniel Vallente and lay pastor Jimmy Teves of the UCCP; and Aldeem Yanez of the IFI.

The Department of Justice indicted RMP staff for alleged terrorist financing. Rev. Glofie Baluntong of the United Methodist Church was subpoenaed in August for violating the Anti-Terrorism Act of 2020 (ATA), a nonbailable offense.

“These are just a few cases of attacks on churches — attacks on our witness and service,” said Toquero, before echoing recommendations of the Philippine UPR Watch, a delegation of human rights defenders and advocates currently in Geneva to participate in the UPR. NCCP is part of the group, together with other church-led initiatives, IFI Project for Rights Defenders and Rise Up for Life and for Rights.

Toquero asked the UN Human Rights Council to investigate the human rights situation in the Philippines and endorse the visits of the mandate holders of UN special procedures. He urged the Philippine government to respect the right to the exercise of the freedom of religion, including “the exercise of ministries in furtherance of religious beliefs.”

He sought the review of counterinsurgency programs, the release of political prisoners and the resumption of the peace talks with the National Democratic Front of the Philippines. He added the abolition of the National Task Force to End Local Communist Armed Conflict that “unleashed attacks on anyone perceived as anti-government,” and the repeal of laws like the Terrorism Financing Prevention and Suppression Act and the ATA.

All these policies, he said, have led to intensified attacks not only on church people but also on human rights defenders, activists, critics, dissenters and the opposition.