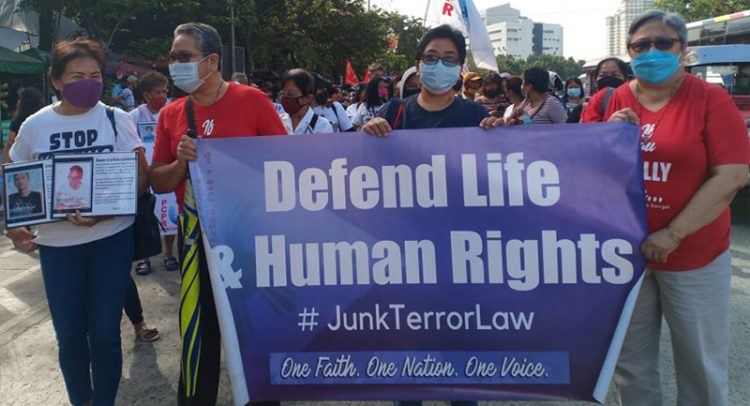 In pursuit of human dignity and shalom: Statement on the human rights crisis in the Philippines

On the 73rd Anniversary of the adoption of the Universal Declaration of Human Rights, and the commemoration of the Human Rights Day, the National Council of Churches in the Philippines continues to pledge its commitment to champion human rights in the country and to work for justice and accountability for those who violate said rights.

This year’s theme for Human Rights Day highlights Equality, found in Article 1 of the Universal Declaration of Human Rights (UDHR) which states that “All humans are born free and equal in dignity and rights”. This article aligns with our belief as Christians that humans were created in the image of God (Genesis 1:26). Each individual is afforded by our Creator with life and dignity, and these gifts are safeguarded and ensured through human rights. Thus, human rights should not to be distorted, defaced, or shattered.

Situations of unpeace in the country is typified with staggering rights violations over the past five years. Economic and cultural rights remained unmet, and thus, human suffering has become prevalent and extreme especially during the pandemic. Just in September, the Philippines has 4.5 million, roughly 8.9% jobless Filipinos. This is one of the highest unemployment rates the country has experienced since January this year. While 4.2 million Filipinos considered themselves hungry in May as the pandemic dragged on1, this has doubled the pre-pandemic average of 2.1 million families who experienced involuntary hunger last December 2019. Rising prices due to nonstop, skyrocketing oil prices brought food even farther away from every Filipino’s table in the past months. These blistering situations of inequality is institutionalized by anti-poor and anti-people policies such as the Rice Liberalization law that puts our local rice and our farmers at the disadvantaged side, even more entrenched in the cycle of poverty. Also, with the issue of contractualization, workers are exploited, as they are on fixed-term jobs, denying them of job security and benefits; and oil deregulation law (or RA 8479) that reduces government control on oil pricing activities. The government’s bloody war on drugs continues even in the midst of the debilitating Covid-19 pandemic.

Those who criticize and resist this condition of hunger, poverty, and inequality brought about by government’s anti-people policies are met with repression by the state which brings massive violations of civil and political rights of the people. Attacks against HR defenders including church people escalated after the peace negotiations between the government and the National Democratic Front of the Philippines (NDFP) was unilaterally terminated by the former in 2017. The pattern of human rights violations (HRVs) shows that the government’s counter-insurgency program has not only targeted armed combatants, but also unarmed civilians even amidst the pandemic. This was institutionalized by the creation of the National Task Force to End Local Communist Armed Conflict (NTF-ELCAC). Using public funds, the task force labelled activists and rights defenders as terrorists, and filed fabricated and false charges against them. This has become legitimized and constant, especially when the Anti-Terrorism Act (ATA) became a law in 2020, that even our pastors and church members were not spared2. The human rights group, Karapatan, monitored 414 state sponsored killings in its counter insurgency campaign, with 211 of those killed are human rights defenders, including lawyers, medical professionals, members of the media and church people from July of 2016 to July 2021. Under the current dispensation, eight church people were already killed.

Eight days before the Human Rights day, the Armed Forces of the Philippines launched aerial bombings in the early morning of December 2, in a farming community in Brgy. Almodias, Miag-ao, Iloilo. The bombing left eight people dead with severed body parts. These indiscriminate bombing of communities clearly violates human rights, particularly international humanitarian law, and the very image of God in those locals as people are left with no recourse, and ability to even protect and defend themselves. Such atrocious attacks deny people of their dignity.

Clearly, the human rights situation in the Philippines under the administration of President Rodrigo Roa Duterte is calamitous. As a Council of Churches, we are dismayed and disappointed by this alarming situation. Nevertheless, despite attacks on God’s gift of human dignity, we will continue to defend human rights and pursue peace based on justice, where shalom and equality exist. As peacemakers, we will also continue to urge the government and the NDFP to resume the peace negotiations. As the Psalmist wrote: “Give justice to the weak and the orphan; maintain the right of the lowly and the destitute. Rescue the weak and the needy; deliver them from the hand of the wicked” (Psalm 82: 3-4).

Conversely, as the 2022 National Elections draws near, we call on all the faithful to choose leaders who have the track records and platforms that champion human rights and peace in the country. Let us elect leaders who will exemplify fairness, truth, and equality for all by truly championing the rights and dignity of the Filipino people and accompany them towards the fulfillment of the fullness of life.

_____________________
1According to Social Weather Station, First Quarter Social Weather Report April 28-May 2, 2021, National Survey
2Under the dispensation of President Rodrigo Duterte, there have been five UCCP Pastors that were arbitrarily arrested. Those arrested include Pastor Jimmy Teves in Negros Occidental in 2019, and Pastor Dan San Andres in Bicol in June of 2020, thankfully, the latter was released but the former is still incarcerated. This was followed by the arrest of Pastor Dan Balucio from Albay, on May 2 of this year. Pastor Dan, who was also a humanitarian actor, was arrested through fabricated charges of illegal possession of firearms and ammunition. Pastor Benjie Gomez was illegally arrested on June 6 in Zamboanga, and weeks later Rev. Nathaniel Vallente from Bohol was also illegally arrested on June 25. Both were slapped with false charges, and accused of supporter of the communist movement. Fabricated charges was also filed against Bishop Hamuel Tequis and Rev. Daniel Palicte on the issue of Haran in Davao. There was also the freezing of the accounts of the UCCP Haran Center in Davao which caters to the needs of the displaced Lumad communities in their region. The Rev. Glofie Baluntong a district superintended of the United Methodist Church from Mindoro, a humanitarian worker was also filed with trumped charges by the military.