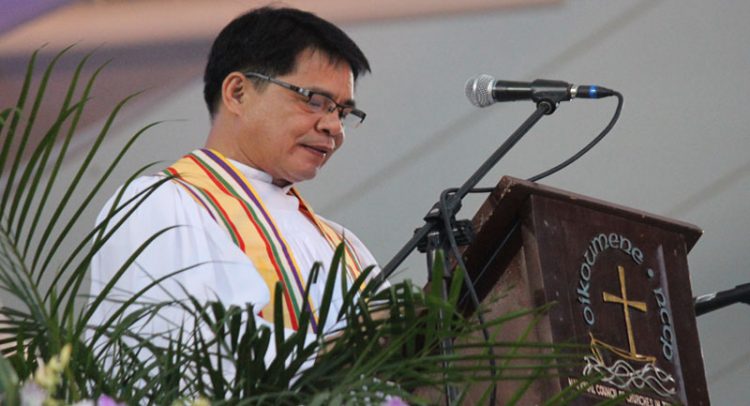 (*A Living faith  for a peaceful country)

One of my favourite Easter hymns goes this way: “It is right and good, always and everywhere, with our whole heart and mind and voice, to praise you, the invisible almighty and eternal God, and your only begotten Son Jesus Christ our Lord; for he is the true Paschal Lamb, who at the Feast of the Passover paid for us the debt of Adam’s sin and by his blood delivered your faithful people.” (Exultet)

Through the years, Christians all over the world observed this greatest of all Christian festivals. This awesome and stupendous event that took place more than two thousand years ago is the high point of the Christian observance, the sole justification for Christian freedom because Jesus finally put “wickedness into flight, washed away sin, restored innocence to the fallen, joy to those who mourn, cast out pride and hatred and brought peace and concord.” So year in and year out we rejoice and observe the feast of the resurrection with all the excitement and with renewed hope. Yet, it would seem that what we see and experience tend to be so dismal contrary to the spirit of the resurrection and we end up wondering where is the magnificent vision of the resurrection.

If the resurrection belongs to the past, then what we are merely celebrating is that it took place at all. We cannot fully relate to it because it belongs to another time and place. It ceases to grip us, to control us – our actions and our wills. If on the other hand, it belongs to the future as most of us understand it (our creed speaks of the resurrection of the body), it is simply something that we look forward to in hope and with the thought that God will be merciful to forgive us if we confess our sins.
Yet, the resurrection is all about Jesus being alive after dying for the redemption of the world, and of creation that comes alive as consequence of the resurrection. Faith is alive because Jesus is alive?

For many years we would wonder why. Like the Psalmist of old we ask: “What is man, that thou art mindful of him, and the son of man that thou dost care for him? Yet thou hast made him little less than God, and dost crown him with glory and honor?” (Ano ang tao upang siya’y iyong alalahanin? At ang anak ng tao upang iyong kalingain? Gayunpama’y ginawa mo siyang mababa nang kaunti, kaysa Diyos, at pinatungan mo siya ng kaluwalhatian at karangalan. (Salmo 8:4-5)

John provides the answer through the verse every Christian ought to know by heart – John 3:16 – “For God so loved the world that he gave his only begotten Son, that whoever believes in him should not perish but have everlasting life.”

The Resurrection is a past event, a vision and a current experience. It is both an event and a call to action. Paul offers us a perspective that makes sense of the resurrection in the conduct of our daily lives. He did not only say his preaching was useless if Christ was not raised from the dead. (1 Cor. 15:12-18) He also said for the future “Do you not know that all of us who have been baptized into Christ Jesus were baptized into his death? We were buried therefore with him by baptism into death, so that as Christ was raised from the dead by the glory of the Father, we too might walk in newness of life.” (Romans 6:3-4)

“Walk in the newness of life” is also a reason for the resurrection. Each time we walk we go somewhere and in the eyes of faith our direction is towards ultimate union with our Lord. As we walk we are characterized by our baptism. We were not just given names at baptism. Not that names are not important. My name Rex Resurreccion Reyes, Jr. always reminds me to do justice to that name. But baptism calls us to responsibility. So the resurrection is about the present as it is about the past and the future.

Christ’s resurrection is not for a particular individual only. Before his passion and death Jesus encouraged his followers who were engaged with the affairs of the world. “In the world, you have tribulation; but be of good cheer, I have overcome the world (John 16:33). Sa sanlibutan ay nahaharap kayo sa pag-uusig. Ngunit lakasan ninyo ang inyong loob, dinaig ko ang sanlibutan.

It would be after his resurrection that the disciples truly appreciated what it meant. They went on to become apostles teaching and engaging the world until they too were killed like their Master.

If newness of life is a result of our redemption perhaps unknowingly we do have experiences in our lives that can be a testimony to the resurrection experience – that of passing from a deathly or deadly situation to a sense of a new lease on life. And nothing indeed can be a more credible testimony than the testimony of our lives.

In December 2014, I was diagnosed with a malignant disease. Surgery, chemotherapy and radiation treatment were prescribed. The thought of these procedures frightened me and more so the thought that my days are numbered. I refused the procedures, choosing instead to try alternative treatment as proposed by many friends. After eight months I had to undergo surgery as my physical condition got worse. Two surgical procedures in four months and recovering from it were the most painful moments in my life physically and emotionally. I had three previous attacks that left me momentarily paralyzed but these were nothing compared to the pain I had to endure. My weight dropped to fifty kilos and for the first time in my life I was giving up. In my prayers I left everything to God. But in those occasions of silence too, I remembered friends and co-workers, some of them younger than I am who have passed away after dealing with physical pain and I stopped being angry, resentful and complaining. Thanks to God’s loving mercy and providence and the prayers of so many friends all over, I stand before you declaring that indeed God is good and His mercy is forever. It is a wonderful personal experience of the newness of life, of a life snatched from the jaws of death.

Personal though the experience may be, it has far implications in the ways I see and relate to the world around me. It is a renewal in strength, in character and in hope. In character because I am now more sensitive and value more my friendship and relations. In strength because I am encouraged more fully by what God means when he said: “But let him who glories glory in this, that he understands and knows me that I am the Lord, who practices steadfast love, justice and righteousness in the earth; for in these things I delight, says the Lord” (Jer. 9:24). “Kundi ang nangamapuri ay dito magpuri, na kanyang nauunawaan at nakikilala ako, na ako ang Panginoon, na nagsasagawa ng kagandahang loob, ng katarungan, at ng katuwiran sa daigdig; sapagkat ang mga bagay na ito ay nalulugod ako, sabi ng Panginoon. And in hope because even now I am experiencing a foretaste of what Jesus means when He said “I will not leave you desolate.” (John 14:18). It means the struggle for peace and justice is an imperative of the resurrection. It is making faith alive.

The resurrection, that act of salvation is a personal experience. Yet, the manifestation of that redemptive act can only be fully understood in relation to the people and the world around us.

3. The resurrection is about the enduring cause of love, humility and service.
On Good Friday the powers of the world killed an innocent man. Unfortunately, 2000 years later, we, in our time are no strangers to events similar to this. In enduring his crucifixion until his death, Jesus Christ exposed the corruption and hypocrisy of the ruling powers of the world. It was an indictment of how cruel human beings could be and to what extent they could inflict suffering on others. It is an event that should never happen to anyone for any reason. In his resurrection his prophetic utterance was fulfilled: “the ruler of the world is judged” (John 16:11) The fight for peace and justice is a choice for life.

How best can we then respond to the love, humility and service of our resurrected Lord? How can we be true to our acclamation that our faith is alive and not something that either belongs to antiquity or some future time? As the song goes “How can I give thanks for the things God has done for me. Having said that I hope you are here because we need to praise and worship God together. God has called us here. To be in this park or memorial circle is only a teaser.

In dying Jesus chose the welfare of the many rather than the security of the few. He was Lord of all yet chose to speak the language of the powerless than the foolishness of the powerful. The language of the powerless was of justice and righteousness, of freedom, dignity and sharing of unity and reconciliation, of the recognition of God’s sovereignty and of the divine promise of abundant life that can be within our lived experience. All because of the resurrection!

Election after election, the NCCP has been conducting electoral education for clean, free, honest and peaceful elections. The dismal conduct of many candidates at this onset of the campaign period perpetuates an election process that runs contrary to the spirit of the resurrection. Many candidate are not talking of “newness of life” but a perpetuation of the same tired old system of patronage politics and the preservation of the elite. The electoral education campaign must go on if we are to enter a new era of a politics of change dramatically and unavoidably. To lose hope for better times is not the spirit of the resurrection. To work hard that our people vote wisely is more in the way towards the resurrection.

To participate actively and intelligently in the movement for social transformation is a concrete way of serving our Risen Lord who continues to serve us and yet calls us his friends.

Humility and genuine service for others are at least two of what we should expect from candidates. Two traits but strong enough to bring this country forward. So far we have politicians who did so much service – service to themselves at the expense of others and politicians whose humility is mere rhetoric. Before the public they are humble but behind they are ravenous wolves ravaging this country of its dignity and future. This is not the resurrection. The resurrection is this: that the hungry are fed, the thirsty are made to drink, the homeless housed, the naked clothed and those in captivity freed. It is the ministry launched by Jesus Christ that he has passed on to us by his earthly example and to which cause he died and rose again.

And now to him who by the power at work within us is able to do far more abundantly than all that we ask or think, to him be glory in the church and in Christ Jesus to all generations, for ever and ever. (Eph. 3:20-21)